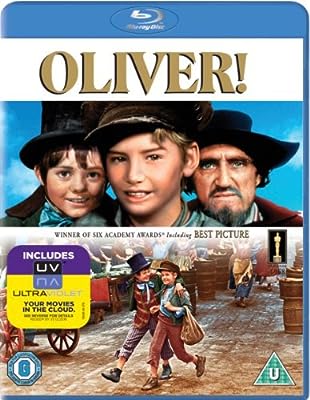 Price: $17.20
As of 2022-09-25 05:21:54 UTC (more info)
Product prices and availability are accurate as of 2022-09-25 05:21:54 UTC and are subject to change. Any price and availability information displayed on http://www.amazon.com/ at the time of purchase will apply to the purchase of this product.
Availability: Not Available - stock arriving soon
Buy Now from Amazon
Product Information (more info)
CERTAIN CONTENT THAT APPEARS ON THIS SITE COMES FROM AMAZON SERVICES LLC. THIS CONTENT IS PROVIDED 'AS IS' AND IS SUBJECT TO CHANGE OR REMOVAL AT ANY TIME.

UK Blu-ray/Region All pressing. Musical version of the classic Dickens tale. Young orphan Oliver (Mark Lester) suffers under a harsh regime at the workhouse run by Mr. Bumble (Harry Secombe). He manages to escape, and, after meeting a friendly pickpocket known as the Artful Dodger (Jack Wild), joins a gang of street thieves operated by the disreputable Fagin (Ron Moody). Although happy with his new friends, Oliver takes a dislike to Fagin's violent and aggressive colleague, Bill Sykes (Oliver Reed). Winner of six Oscars, including Best Picture and Best Director.