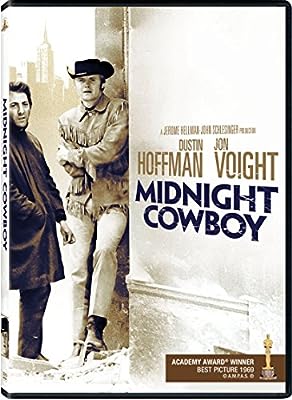 Price: $9.96
As of 2022-08-17 19:55:01 UTC (more info)
Product prices and availability are accurate as of 2022-08-17 19:55:01 UTC and are subject to change. Any price and availability information displayed on http://www.amazon.com/ at the time of purchase will apply to the purchase of this product.
Availability: Not Available - stock arriving soon
Buy Now from Amazon
Product Information (more info)
CERTAIN CONTENT THAT APPEARS ON THIS SITE COMES FROM AMAZON SERVICES LLC. THIS CONTENT IS PROVIDED 'AS IS' AND IS SUBJECT TO CHANGE OR REMOVAL AT ANY TIME.

Cowboy Joe Buck moves to New York City from Texas to make his fortune as a hustler servicing rich Park Avenue women. Shortly after arriving, he is hustled by homeless con man Ratzo Rizzo, who had said he would manage him for a $20 fee. Bent on getting his money back, Buck finds the rapidly deteriorating Rizzo, ends up feeling sorry for him, and moving into Rizzo's room in an abandoned building to care for him. The two remain hopeful of striking it rich with Rizzo managing Buck's career, but it soon becomes obvious that they are no match for the urban jungle.

The first, and only, X-rated film to win a best picture Academy Award, John Schlesinger's Midnight Cowboy seems a lot less daring today (and has been reclassified as an R), but remains a fascinating time capsule of late-1960s sexual decadence in mainstream American cinema. In a career-making performance, Jon Voight plays Joe Buck, a naive Texas dishwasher who goes to the big city (New York) to make his fortune as a sexual hustler. Although enthusiastic about selling himself to rich ladies for stud services, he quickly finds it hard to make a living and eventually crashes in a seedy dump with a crippled petty thief named Ratzo Rizzo (Dustin Hoffman, doing one of his more effective "stupid acting tricks," with a limp and a high-pitch rasp of a voice). Schlesinger's quick-cut, semi-psychedelic style has dated severely, as has his ruthlessly cynical approach to almost everybody but the lead characters. But at its heart the movie is a sad tale of friendship between a couple of losers lost in the big city, and with an ending no studio would approve today. It's a bit like an urban Of Mice and Men, but where both guys are Lenny. --Jim Emerson