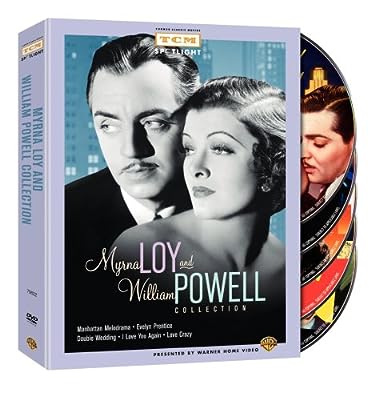 Price: $109.95
As of 2022-10-04 20:44:24 UTC (more info)
Product prices and availability are accurate as of 2022-10-04 20:44:24 UTC and are subject to change. Any price and availability information displayed on http://www.amazon.com/ at the time of purchase will apply to the purchase of this product.
Availability: Not Available - stock arriving soon
Buy Now from Amazon
Product Information (more info)
CERTAIN CONTENT THAT APPEARS ON THIS SITE COMES FROM AMAZON SERVICES LLC. THIS CONTENT IS PROVIDED 'AS IS' AND IS SUBJECT TO CHANGE OR REMOVAL AT ANY TIME.

The Thin Man was just the beginning. Myrna Loy and William Powell were one of Hollywood's best-matched screen teams, with the chemistry fairly bubbling in their scenes together, as this Warner treasure trove boxed set shows. Audiences in the '30s and '40s delighted in the fact that Loy's urbane sophisticate characters could match Powell's quip for quip, martini for martini.

Manhattan Melodrama (1934) showcases Powell and Clark Gable as longtime friends on opposite sides of the law, and is the first pairing of Loy and Powell (and the first of four films they would make in 1934 alone. The film is briskly directed and the crackling screenplay won an Oscar the next year. Evelyn Prentice (1934) is the troubled wife (Loy) of a preoccupied attorney (Powell) who appears oblivious. The story isn't one of the strongest in the collection, but the cast sparkles nonetheless. A witchy Rosalind Russell makes her memorable film debut as a femme fatale.

Double Wedding (1937) lets Loy and Powell flex their comedic chops. The plot is full of switchbacks and misunderstandings, but the key point is that their pal Waldo (John Beal) is that dreaded '30s male screen archetype, the milquetoast. Much of the film's fun is watching Powell's character coach poor Waldo to grow a backbone: "Women don't like noble, self-sacrificing men. Women are not civilized like we are. They like bloodshed!"

I Love You Again (1940) is one of the top screwball comedies of all time. George (Powell) is bonked on the head and realizes he's had amnesia for the past several years, has been terribly boring and has been, yes, a milquetoast--who's about to be divorced by his fed-up wife, Kay (Loy). The crazy plot is lofted by the brilliant screenplay and the delivery of the two leads, who spar like expert fencers: George: "You be careful, madam, or you'll turn my pretty head with your flattery!" Kay: "I often wished I could turn your head--on a spit, over a slow fire." Divine! Love Crazy (1941) is another classic farce, featuring Powell in drag, Powell faking insanity, Powell conniving to win back Loy's love--all in a witty, urbane way, of course.

The set is also chockfull of great extras, with each feature paired with a classic comedy or musical short, plus cartoon or audio radio interviews. The icing on the cake: The fabulous packaging, including an image from the original movie posters on the discs themselves. Film lovers won't want to miss this splendid collection. --A.T. Hurley

Meet Me in St. Louis [Blu-ray]