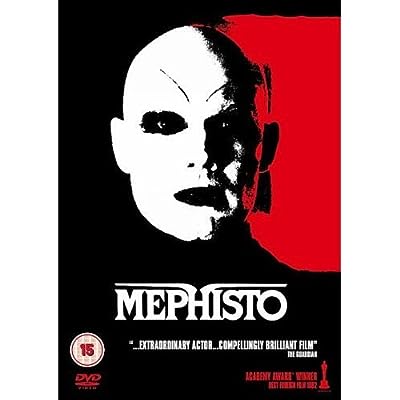 Price: $119.99
As of 2022-10-07 19:55:35 UTC (more info)
Product prices and availability are accurate as of 2022-10-07 19:55:35 UTC and are subject to change. Any price and availability information displayed on http://www.amazon.com/ at the time of purchase will apply to the purchase of this product.
Availability: Not Available - stock arriving soon
Buy Now from Amazon
Product Information (more info)
CERTAIN CONTENT THAT APPEARS ON THIS SITE COMES FROM AMAZON SERVICES LLC. THIS CONTENT IS PROVIDED 'AS IS' AND IS SUBJECT TO CHANGE OR REMOVAL AT ANY TIME.

United Kingdom released, PAL/Region 0 DVD: it WILL NOT play on standard US DVD player. You need multi-region PAL/NTSC DVD player to view it in USA/Canada: LANGUAGES: English ( Dolby Digital 2.0 ), ANAMORPHIC WIDESCREEN (1.78:1), SPECIAL FEATURES: Anamorphic Widescreen, Interactive Menu, Scene Access, SYNOPSIS: A German stage actor finds unexpected success and mixed blessings in the popularity of his performance in a Faustian play as the Nazis take power in pre-WWII Germany. As his associates and friends flee or are ground under by the Nazi terror, the popularity of his character supercedes his own existence until he finds that his best performance is keeping up appearances for his Nazi patrons. SCREENED/AWARDED AT: Cannes Film Festival, David Donatello Awards, Oscar Academy Awards, ...Mephisto (UK)