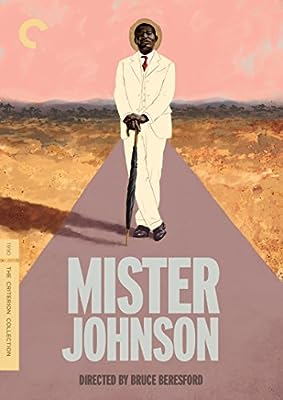 Price: $22.99
As of 2022-10-04 01:33:13 UTC (more info)
Product prices and availability are accurate as of 2022-10-04 01:33:13 UTC and are subject to change. Any price and availability information displayed on http://www.amazon.com/ at the time of purchase will apply to the purchase of this product.
Availability: Not Available - stock arriving soon
Buy Now from Amazon
Product Information (more info)
CERTAIN CONTENT THAT APPEARS ON THIS SITE COMES FROM AMAZON SERVICES LLC. THIS CONTENT IS PROVIDED 'AS IS' AND IS SUBJECT TO CHANGE OR REMOVAL AT ANY TIME.

A decade after he broke through with Breaker Morant, Australian director Bruce Beresford made another acclaimed film about the effects of colonialism on the individual. In a performance that earned him the Berlin Film Festival’s Silver Bear for best actor, Maynard Eziashi (Bopha!) plays the title character, a Nigerian villager eager to work as a civil servant for the British authorities, including a sympathetic district officer (GoldenEye’s Pierce Brosnan), in the hopes that it will benefit him in the future. Instead, his ambition leads to his tragic downfall. Mister Johnson, based on a 1939 novel by Joyce Cary, is a graceful, heartfelt drama about the limits of idealism, affectingly acted and handsomely shot. DIRECTOR-APPROVED DVD SPECIAL EDITION FEATURES  • New 4K digital restoration, supervised and approved by director Bruce Beresford  • New video interviews with Beresford, producer Michael Fitzgerald, and actors Maynard Eziashi and Pierce Brosnan • Trailer • PLUS: An essay by film scholar Neil Sinyard