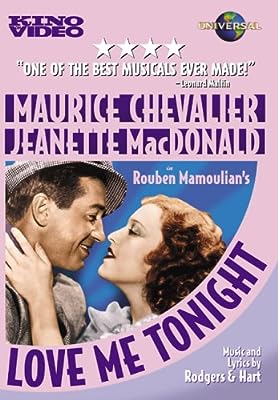 Price: $35.83
As of 2022-11-29 17:09:50 UTC (more info)
Product prices and availability are accurate as of 2022-11-29 17:09:50 UTC and are subject to change. Any price and availability information displayed on http://www.amazon.com/ at the time of purchase will apply to the purchase of this product.
Availability: Not Available - stock arriving soon
Buy Now from Amazon
Product Information (more info)
CERTAIN CONTENT THAT APPEARS ON THIS SITE COMES FROM AMAZON SERVICES LLC. THIS CONTENT IS PROVIDED 'AS IS' AND IS SUBJECT TO CHANGE OR REMOVAL AT ANY TIME.

Love Me Tonight is a madcap musical tour de force of infectious melody, effortless vivacity and ceaseless invention from first frame to last. Building on a foundations of songs by Rodgers and Hard ("Babes In Arms", "Pal Joey"), director Rouben Mamoulian (Applause) shepherds Maurice Chevalier and Jeanette Macdonald through an exuberant romp that film maven Leslie Haliwell declared, "the most fluently cinematic comedy musical ever made." Carefree tailor Maurice Chevalier leaves a backlot Paris where music literally radiates from every shop, sidewalk and boudoir to collect on a past due bill at a recalcitrant aristocratic client's family chateau. Mistaken for royalty, Maurice runs a gauntlet of lunatic blue-bloods, including love-happy Myrna Loy and screwball icon Charlie Ruggles. But it is Princess Jeanette MacDonald's closely guarded heart that Maurice desires and it will take every ounce of his ingenious pluck to woo her without revealing his well-meaning romantic deception. Rouben Mamoulian nimbly packs Love Me Tonight with enough high-spirited cinematic invention to fill a dozen films. Using everything from zoom lenses to slow motion (both unheard of in 30's Hollywood), Mamoulian erased the lines that defined the musical genre, breaking rules that were still being established. Bravura musical performances, cheeky pre-code innuendo and astoundingly modern filmic touches are blended into a show stopping movie confection decades ahead of its time. Available for the first time on DVD, Love Me Tonight is an assuredly spontaneous musical milestone of sophisticated absurdity and risqu+ª enchantment.

The best movie musical you've never heard of is Love Me Tonight, a deliciously clever 1932 Rodgers and Hart romp. The film opens with a tour de force, as the rhythmic sounds of a Paris morning morph into music and we meet a humble tailor (Maurice Chevalier) whose future looks bright. At least he thinks so. And then the great song "Isn't It Romantic?" kicks in, introduced by Chevalier but immediately handed off to client, cab driver, and a series of tune-carriers who finally bring the catchy melody to a dreamy princess (Jeannette MacDonald). It's probably the giddiest sequence in a very fun film, and "Isn't It Romantic?" would continue popping up in Paramount movies for years (Billy Wilder was especially partial to it). The humble tailor must travel to the princess's chateau to collect a bill from family playboy Charlie Ruggles, which puts Chevalier in pleasant proximity to MacDonald and saucy Myrna Loy. It also brings forth more Rodgers and Hart goodies: the classic "Lover" (a great romantic waltz played here as a lark), "Mimi," and the title song. Rouben Mamoulian directed, in the full stride of his early-sound creativity (this was just after his Dr. Jekyll and Mr. Hyde), using a variety of effects that look positively New Wave. Chevalier and MacDonald are a delight together (by all means see them in The Love Parade and One Hour with You, too), and Charlie Butterworth has some glorious moments as a prospective MacDonald suitor. Also worth the price of admission: the spectacle of crusty character actor C. Aubrey Smith singing. --Robert Horton