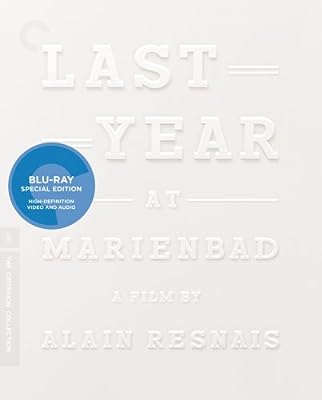 Price: $39.95
As of 2021-10-23 12:03:28 UTC (more info)
Product prices and availability are accurate as of 2021-10-23 12:03:28 UTC and are subject to change. Any price and availability information displayed on http://www.amazon.com/ at the time of purchase will apply to the purchase of this product.
Availability: Not Available - stock arriving soon
Buy Now from Amazon
Product Information (more info)
CERTAIN CONTENT THAT APPEARS ON THIS SITE COMES FROM AMAZON SERVICES LLC. THIS CONTENT IS PROVIDED 'AS IS' AND IS SUBJECT TO CHANGE OR REMOVAL AT ANY TIME.

Last Year at Marienbad is an abstract surreal masterpiece; a baffling puzzle that in many ways is unsolvable and yet still seduces it's viewer by its hypnotic and beautiful mysteries. The basic story is a surprisingly simple love triangle. A man who is one of the guests; (referred to as X) tries to convince a woman (whose name is A) that they previously fallen in love the summer before in Frederiksbad. In his telling, the putative couple had planned to run away together, but she had asked him to wait one year. A at first refutes X’s claim but is gradually swayed by his insistence. During the film X plays several games of Nim with M, A's jealous husband or lover (it's never really explained) where M always comes out winning, and ultimately A finally agrees to leave with X. Even though continuity is destroyed by its methods of filming and editing, the film offers instead a 'mental continuity', of thought and memory. In determining the visual appearance of the film, Resnais said that he wanted to recreate a certain style of silent cinema. It is this constant dance of seduction and evasion that makes Last Year at Marienbad so challenging, and engaging, as you let yourself be carried along by the rhythms of its music, voice-over, and the dream-like tracking shots which smoothly glide down the grand hotel corridors

Not just a defining work of the French New Wave but one of the great, lasting mysteries of modern art, Alain Resnais’ epochal visual poem has been puzzling appreciative viewers for decades. A surreal fever dream, or perhaps a nightmare, Last Year at Marienbad (L’année dernière à Marienbad), written by the radical master of the New Novel, Alain Robbe-Grillet, gorgeously fuses the past with the present in telling its ambiguous tale of a man and a woman (Giorgio Albertazzi and Delphine Seyrig) who may or may not have met a year ago, perhaps at the very same cathedral-like, mirror-bedecked château they now find themselves wandering. Unforgettable in both its confounding details (gilded ceilings, diabolical parlor games, a loaded gun) and haunting scope, Resnais’ investigation into the nature of memory is disturbing, romantic, and maybe even a ghost story.

Stills from Last Year at Marienbad (Click for larger image)

Last Year at Marienbad opens with beautiful shots of the labyrinthine castle and the baroque design of which is as consciously geometric as it is overloaded with theatrical designs and elaborate architecture. You see gorgeous framed paintings on the walls and of the luscious garden outside with its exceedingly regular lay-out that is typical of the French garden architecture of the 17th and 18th centuries. While the camera flows slowly through the hallways, galleries, and salons of the hotel's seemingly endless structure, we hear the disturbing music by Francis Seyrig, mostly performed on an organ; which sound similar to a gothic horror film. When first released Last Year at Marienbad was either hailed by critics or royally slammed. The split opinions over this experimental film is certainly understandable; since it goes against everything an audience enjoys when going to see a motion picture like, a linear storyline, character development, continuity, conflict and a resolution. It's a very difficult film, but like all great art; everyone comes away with their own interpretations, thoughts and feelings. What critics that even hated the film can't deny is that it is one of the most beautiful looking films of all time that show shots of ornate ceilings, vast drawing rooms, enormous mirrors and reflections, paintings, endless corridors and grounds in which shrubbery has been tortured into geometric shapes and patterns.