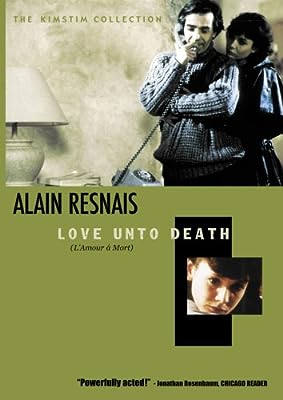 Price: $24.49
Availability: Not Available - stock arriving soon
Buy Now from Amazon
Product Information (more info)
CERTAIN CONTENT THAT APPEARS ON THIS SITE COMES FROM AMAZON SERVICES LLC. THIS CONTENT IS PROVIDED 'AS IS' AND IS SUBJECT TO CHANGE OR REMOVAL AT ANY TIME.

From Alain Resnais, the award-winning French director of such cinematic masterpieces as Night and Fog and Hiroshima, Mon Amour, comes Love Unto Death, his moving follow-up to the highly successful Life Is a Bed of Roses. Made during Resnais s mid-career renaissance in the 1980 s, Love Unto Death is a tightly constructed meditation on the nature of love and death. Pierre Arditi and Sabine Azema (both of Life is a Bed of Roses) star as Simon and Elizabeth, an affectionate couple happily in love until Simon has a sudden and seemingly fatal seizure. After miraculously surviving, Simon becomes obsessed with the possibility of his own death. The couple tell their close friends Jerome and Judith (Andre Dussollier and Fanny Ardant), clerics who have their own interesting opinions on the subject... In Love Unto Death, Resnais dresses his lead actors in symbolic colors, uses striking musical interludes (by Hans Werner Henze), and adopts strong formal devices to explore both philosophical and cinematic themes. The result is an underrated gem by one of international cinema s most talented and acclaimed directors.