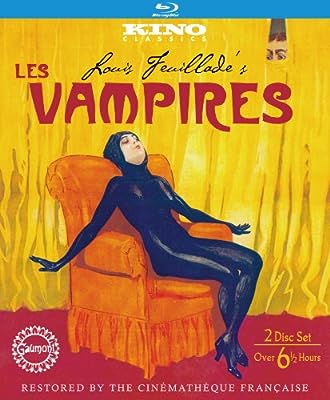 Price: $23.64
As of 2022-11-27 23:32:05 UTC (more info)
Product prices and availability are accurate as of 2022-11-27 23:32:05 UTC and are subject to change. Any price and availability information displayed on http://www.amazon.com/ at the time of purchase will apply to the purchase of this product.
Availability: Not Available - stock arriving soon
Buy Now from Amazon
Product Information (more info)
CERTAIN CONTENT THAT APPEARS ON THIS SITE COMES FROM AMAZON SERVICES LLC. THIS CONTENT IS PROVIDED 'AS IS' AND IS SUBJECT TO CHANGE OR REMOVAL AT ANY TIME.

Edouard Mathe stars as Philippe Guerande, a crime-fighting journalist who attempts to penetrate the international ring of thieves known as The Vampires. Among the most fascinating of these sophisticated thieves and assassins is Irma Vep (Musidora), a black-clad seductress whose name is an anagram for ''vampre'' and who endures today as an icon of European cinema.

At times gruesome, fantastic, and romantic, Les Vampires was a spectacular accomplishment that influenced filmmakers for generations. This Kino Classics edition is authorized by the Gaumont Studios, and was mastered in HD from 35mm film elements restored by the Cinematheque Francaise, and is accompanied by a new musical score by the Mont Alto Motion Picture Orchestra.

The General (The Ultimate Two-Disc Editi...