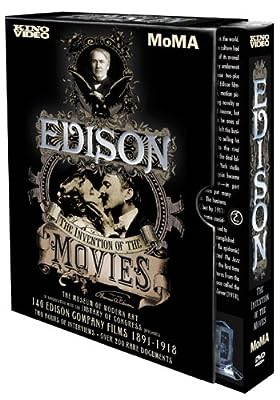 Price: $57.99
As of 2022-10-02 18:01:08 UTC (more info)
Product prices and availability are accurate as of 2022-10-02 18:01:08 UTC and are subject to change. Any price and availability information displayed on http://www.amazon.com/ at the time of purchase will apply to the purchase of this product.
Availability: Not Available - stock arriving soon
Buy Now from Amazon
Product Information (more info)
CERTAIN CONTENT THAT APPEARS ON THIS SITE COMES FROM AMAZON SERVICES LLC. THIS CONTENT IS PROVIDED 'AS IS' AND IS SUBJECT TO CHANGE OR REMOVAL AT ANY TIME.

An Interactive History of the Edison Company and the Invention of the Motion Picture. An unprecedented collection from Kino International and the Film/Media Department of The Museum of Modern Art together with the Library of Congress

Edison - The Invention of the Movies is a four-disc treasure trove of 140 of the first moving pictures ever seen, spanning the birth of cinema from 1891-1918. The collaboration between Kino Video and the Museum of Modern Art includes 14-second-long camera tests, early special effects, street scenes, humorous shorts, and "The Great Train Robbery," widely considered the world's first blockbuster. Arranged chronologically, the films gradually improve in technical sophistication and narrative complexity while providing riveting glimpses of American culture 100 years ago. Highlights include the slyly edited "The Gay Shoe Clerk," the phantasmagoric "Dreams of the Rarebit Fiend," and a film of social justice called "The Kleptomaniac." Contemporary sensibilities will be challenged by persistent racial stereotypes in a number of the films, as well as by a horrific short showing the electrocution of an elephant. The educational possibilities represented in this set are vast.

If Kino Video and MoMA had simply released these restored films on DVD, it would still be one of the notable releases of the year, but they have gone further by filling out the set with over two hours of interviews with scholars and archivists. The films can be watched with or without these explanatory interviews, which lend the kind of historical context and thoughtful analysis one finds on the best museum tours. We learn that Edison's first studio was a tar-papered contraption called "Black Maria" that could be rotated to take advantage of available sunlight. Patrick Loughney of The Library of Congress details how many of Edison's films survive on printed paper reels submitted to a copyright office that at the time had no way of cataloging film. Author Michelle Wallace provides insight on how the films represented--and perpetuated-- the stereotypes of the era. If viewers have any energy left after this erudite festival of moving images, there are more than 200 still images from MoMA's Edison Collection to browse. The film history buff's collection is simply not complete without this set. --Ryan Boudinot