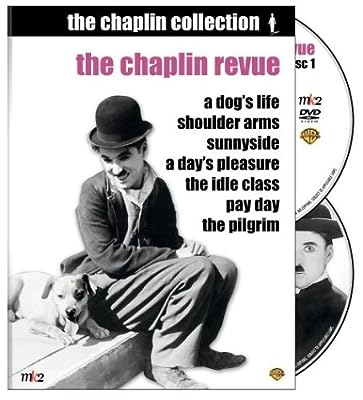 Price: $29.98
As of 2022-12-06 22:48:40 UTC (more info)
Product prices and availability are accurate as of 2022-12-06 22:48:40 UTC and are subject to change. Any price and availability information displayed on http://www.amazon.com/ at the time of purchase will apply to the purchase of this product.
Availability: Not Available - stock arriving soon
Buy Now from Amazon
Product Information (more info)
CERTAIN CONTENT THAT APPEARS ON THIS SITE COMES FROM AMAZON SERVICES LLC. THIS CONTENT IS PROVIDED 'AS IS' AND IS SUBJECT TO CHANGE OR REMOVAL AT ANY TIME.

That Charles Chaplin's Little Fellow (his own name for the Little Tramp) is such a Comic Everyman enabled the master moviemaker to place the character in all manner of situations. That versatility abounds in this treasure chest of seven marvelous movies made for First National between 1918 and 1923. Included are such touchstones as Shoulder Arms (his popular portrayal of World War I trench life), The Idle Class (skewering the rich) and The Pilgrim (lampooning small-town hypocrisy), along with the charming and hilarious views of family life and romance in A Dog's Life, A Day's Pleasure, Sunnyside and Pay Day.

Seven Charlie Chaplin two-reelers are included on this two-disc set, including The Chaplin Revue, a 1959 compilation comprising three silent comedies (A Dog's Life, Shoulder Arms, and The Pilgrim). Among the high points are the flawless A Dog's Life, in which the Tramp befriends a mutt (among its sublime routines is a superbly executed scene with Chaplin stealing pastries from a street vendor), and the ambitious Shoulder Arms, which sends Charlie to the trenches of World War I. There's also The Idle Class, which casts Chaplin in two roles: as the Tramp, and as a foppish rich man with a weakness for drink (and a weakness for absent-mindedness, in a brilliant scene in which he forgets his trousers). A Day's Pleasure is a lark with good gags aboard a swaying boat, while Sunnyside is downright peculiar at times--though Chaplin's addled dance with imaginary nymphs is pure acrobatic daffiness. --Robert Horton