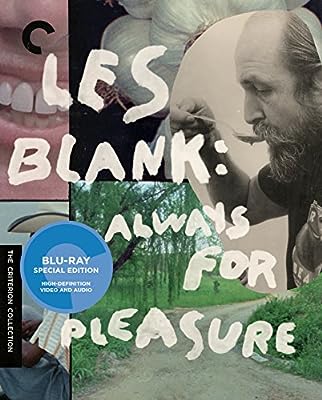 Price: $119.92
As of 2023-02-07 08:33:02 UTC (more info)
Product prices and availability are accurate as of 2023-02-07 08:33:02 UTC and are subject to change. Any price and availability information displayed on http://www.amazon.com/ at the time of purchase will apply to the purchase of this product.
Availability: Not Available - stock arriving soon
Buy Now from Amazon
Product Information (more info)
CERTAIN CONTENT THAT APPEARS ON THIS SITE COMES FROM AMAZON SERVICES LLC. THIS CONTENT IS PROVIDED 'AS IS' AND IS SUBJECT TO CHANGE OR REMOVAL AT ANY TIME.

An uncompromisingly independent filmmaker, Les Blank made documentaries for nearly fifty years, elegantly disappearing with his camera into cultural spots rarely seen on-screenmostly on the peripheries of the United States, but also occasionally abroad. Seemingly off-the-cuff yet poetically constructed, these films are humane, sometimes wry, always engaging tributes to music, food, and all sorts of regionally specific delights. This collector's set provides a diverse survey of Les Blank's vast output, including fourteen of his best-known works and eight related short films.The Blues Accordin' to Lightnin' Hopkins (1968); God Respects Us When We Work, but Loves Us When We Dance (1968); Spend It All (1971); A Well Spent Life (1971); Dry Wood (1973); Hot Pepper (1973); Always for Pleasure (1978); Garlic Is as Good as Ten Mothers (1980); Sprout Wings and Fly (1983); In Heaven There Is No Beer? (1984); Gap-Toothed Women (1987); Yum, Yum, Yum! A Taste of Cajun and Creole Cooking (1990); The Maestro: King of the Cowboy Artists (1994); Sworn to the Drum: A Tribute to Francisco Aguabella (1995)