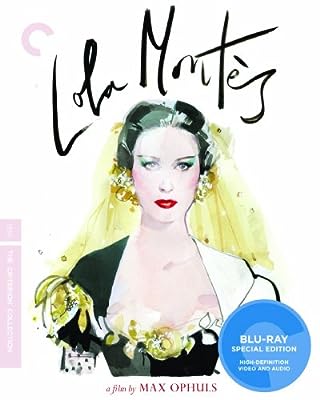 Price: $39.95
As of 2022-12-06 10:22:45 UTC (more info)
Product prices and availability are accurate as of 2022-12-06 10:22:45 UTC and are subject to change. Any price and availability information displayed on http://www.amazon.com/ at the time of purchase will apply to the purchase of this product.
Availability: Not Available - stock arriving soon
Buy Now from Amazon
Product Information (more info)
CERTAIN CONTENT THAT APPEARS ON THIS SITE COMES FROM AMAZON SERVICES LLC. THIS CONTENT IS PROVIDED 'AS IS' AND IS SUBJECT TO CHANGE OR REMOVAL AT ANY TIME.

Max Ophüls explores the scandalous life of dancer and courtesan Lola Montes with a bittersweet empathy that turns melodrama into a tragic melancholy masterpiece. Using the theatrical re-creation of Lola's life in a big-top pageant as a framing device, Ophüls contrasts the outrageous sensationalism of her reputation with poignant, poetic flashbacks that explore her many affairs, most notably with Franz Liszt (Will Quadflieg) and King Ludwig of Bavaria (Anton Walbrook). Lola's greatest tragedy is that she loved well, if not too wisely. If Martine Carol's central performance is lacking passion, as many critics have argued, her quiet, at times seemingly passive demeanor makes her a veritable prisoner of her society and her reputation. Swept along by Ophüls's sweeping camerawork, which glides through the film in a balance of intimacy and contemplative remove as if on the wings of angels, her life becomes like a cinematic ballet with Ophüls the choreographer and conductor. Peter Ustinov costars as the jaded circus ringmaster, who nightly narrates her exploits to a throng of scandal-hungry spectators, while she performs with a face hardened in indifference, resigned to her empty role as a figure of spectacle in a garish gilded cage. Shot in delicate color and impeccably composed wide screen compositions throughout by Ophüls's regular cinematographer Christian Matras, Lola Montes is his most beautiful and restrained film, a fitting swan song for one of the cinema's most sensitive directors. --Sean Axmaker