Lady For A Day 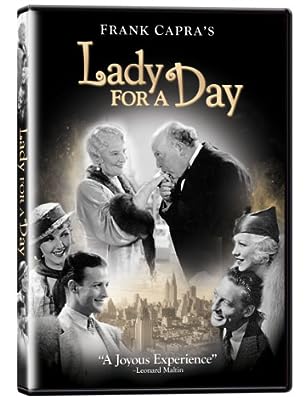 Price: $14.98
As of 2022-10-02 12:18:31 UTC (more info)
Product prices and availability are accurate as of 2022-10-02 12:18:31 UTC and are subject to change. Any price and availability information displayed on http://www.amazon.com/ at the time of purchase will apply to the purchase of this product.
Availability: Not Available - stock arriving soon
Buy Now from Amazon
Product Information (more info)
CERTAIN CONTENT THAT APPEARS ON THIS SITE COMES FROM AMAZON SERVICES LLC. THIS CONTENT IS PROVIDED 'AS IS' AND IS SUBJECT TO CHANGE OR REMOVAL AT ANY TIME.

May Robson plays Apple Annie in Frank Capra s wonderful and enduring comedy/drama, based on a short story by Damon Runyon, with a hilarious and heartwarming script by Robert Riskin. When Louise (Jean Parker) announces that she plans to visit her mother to introduce her aristocratic fiancé, Apple Annie s friends, including gangster Dave the Dude (Warren William), Judge Henry D. Blake (Guy Kibbee) and Missouri Martin (Glenda Farrell), rally around to transform her from a poor street peddler into the society matron her daughter is expecting to see.

The Bitter Tea of General Yen

It Happened One Night