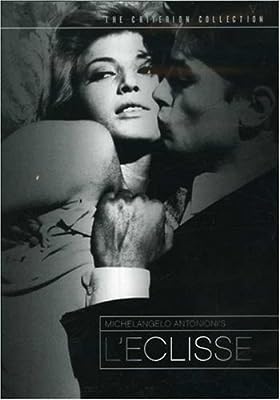 Price: $49.96
As of 2023-02-07 06:33:38 UTC (more info)
Product prices and availability are accurate as of 2023-02-07 06:33:38 UTC and are subject to change. Any price and availability information displayed on http://www.amazon.com/ at the time of purchase will apply to the purchase of this product.
Availability: Not Available - stock arriving soon
Buy Now from Amazon
Product Information (more info)
CERTAIN CONTENT THAT APPEARS ON THIS SITE COMES FROM AMAZON SERVICES LLC. THIS CONTENT IS PROVIDED 'AS IS' AND IS SUBJECT TO CHANGE OR REMOVAL AT ANY TIME.

The conclusion of Michelangelo Antonioni’s informal trilogy on modern malaise, which began with L’avventura, L’eclisse (The Eclipse) tells the story of a young woman (Monica Vitti) who leaves one lover (Francisco Rabal) only to drift into a relationship with another (Alain Delon).

Michelangelo Antonioni's L'Eclisse rolls over you and wraps you in its stylish embrace. The plot, such as it is, follows Vittoria (luscious Monica Vitti, The Red Desert) as her engagement falls apart and she slowly falls into a giddy but anxious affair with Piero (Alain Delon, Le Samourai, Purple Noon), a trader in Rome's stock exchange. Like Ingmar Bergman (Scenes from a Marriage, Persona), Antonioni examines the nuances of human relationships--but where Bergman is dense and dialogue-driven, Antonioni is spare and visual (there's maybe a page of dialogue in the first fifteen minutes of L'Eclisse). Every frame is like an exquisite black and white photograph, yet there's nothing static about this movie. It's fluid, sleek, and graceful, achieving its own kind of visual music. L'Eclisse contrasts opposing elements: Light and shadow, noise and silence, laughter and death, love and money, desire and dissatisfaction. Critics often describe the movie as a portrait of modern alienation, but they focus too much on Vittoria herself; while she finds her own life wanting, all around her Antonioni's camera captures a much larger world, full of as much vitality as despair, as much hope as loss. This is a movie essential to anyone's understanding of what movies can be. --Bret Fetzer