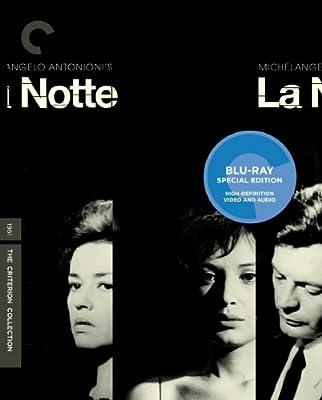 Price: $27.99
As of 2020-02-20 15:18:09 UTC (more info)
Product prices and availability are accurate as of 2020-02-20 15:18:09 UTC and are subject to change. Any price and availability information displayed on http://www.amazon.com/ at the time of purchase will apply to the purchase of this product.
Availability: Not Available - stock arriving soon
Buy Now from Amazon
Product Information (more info)
CERTAIN CONTENT THAT APPEARS ON THIS SITE COMES FROM AMAZON SERVICES LLC. THIS CONTENT IS PROVIDED 'AS IS' AND IS SUBJECT TO CHANGE OR REMOVAL AT ANY TIME.

This psychologically acute, visually striking modernist work was director Michelangelo Antonioni’s follow-up to the epochal L’avventura. Marcello Mastroianni (Divorce Italian Style) and Jeanne Moreau (Jules and Jim) star as a novelist and his frustrated wife who, over the course of one night, confront their alienation from each other and the achingly empty bourgeois Milan circles in which they travel. Antonioni’s muse Monica Vitti (Red Desert) smolders as an industrialist’s tempting daughter. Moodily sensual cinematography and subtly expressive performances make LA NOTTE an indelible illustration of romantic and social deterioration.