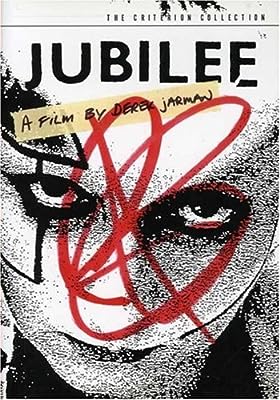 Price: $29.97
As of 2023-02-08 03:11:06 UTC (more info)
Product prices and availability are accurate as of 2023-02-08 03:11:06 UTC and are subject to change. Any price and availability information displayed on http://www.amazon.com/ at the time of purchase will apply to the purchase of this product.
Availability: Not Available - stock arriving soon
Buy Now from Amazon
Product Information (more info)
CERTAIN CONTENT THAT APPEARS ON THIS SITE COMES FROM AMAZON SERVICES LLC. THIS CONTENT IS PROVIDED 'AS IS' AND IS SUBJECT TO CHANGE OR REMOVAL AT ANY TIME.

When Queen Elizabeth I asks her court alchemist to show her England in the future, she’s transported 400 years to a post-apocalyptic wasteland of roving girl gangs, an all-powerful media mogul, fascistic police, scattered filth, and twisted sex. With Jubilee, legendary British filmmaker Derek Jarman channeled political dissent and artistic daring into a revolutionary blend of history and fantasy, musical and cinematic experimentation, satire and anger, fashion and philosophy. With its uninhibited punk petulance and sloganeering, Jubilee, brings together many cultural and musical icons of the time, including Jordan, Toyah Willcox, Little Nell, Wayne County, Adam Ant, and Brian Eno (with his first original film score), to create a genuinely unique, unforgettable vision. Ahead of its time and often frighteningly accurate in its predictions, it is a fascinating historical document and a gorgeous work of film art.

Avant-garde spirit and punk-rock attitude combine with iconoclastic results in Derek Jarman's defiantly uncommercial Jubilee. Filmed in 1977--the silver jubilee year of England's Queen Elizabeth II--this fascinating hodgepodge of political dissent and audiovisual experimentation now stands as a vibrant document of its time, both immediate and enduring in its bold rejection of all things conventional. (Compared to this, the quasi-punk Repo Man and angst-ridden Sid & Nancy seem positively tame.) Jarman's film deserved its mixed reviews; like the films of Andy Warhol, it's a slapdash affair, cobbled together by Jarman and his fringe-dwelling friends, ostensibly designed as a kaleidoscopic glimpse of London's future, infused with apocalyptic nihilism and populated by proto-punks (including Adam Ant and Rocky Horror's Little Nell) in an anarchic orgy of gay and straight sex, music, violence, and (in retrospect) astonishingly accurate pop-cultural prophesy. It's the pioneering, angry/funny work of a genuine artist, as essential to punk film as the Sex Pistols were to music in the dreadful days of disco. --Jeff Shannon