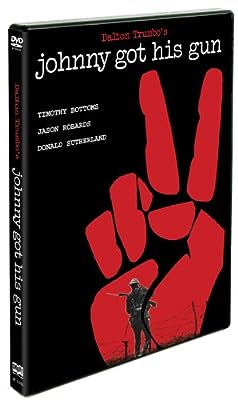 Price: $14.39
As of 2022-11-27 12:01:35 UTC (more info)
Product prices and availability are accurate as of 2022-11-27 12:01:35 UTC and are subject to change. Any price and availability information displayed on http://www.amazon.com/ at the time of purchase will apply to the purchase of this product.
Availability: Not Available - stock arriving soon
Buy Now from Amazon
Product Information (more info)
CERTAIN CONTENT THAT APPEARS ON THIS SITE COMES FROM AMAZON SERVICES LLC. THIS CONTENT IS PROVIDED 'AS IS' AND IS SUBJECT TO CHANGE OR REMOVAL AT ANY TIME.

A young American soldier (Timothy Bottoms) is wounded by a mortar shell on the last day of World War I. He lies in a hospital bed as a quadruple amputee who has lost his arms, legs, eyes, ears, mouth and nose. He remains conscious and able to think, thereby reliving his life through strange dreams, memories and conversations with Jesus (Donald Sutherland), unable to distinguish whether he is awake or dreaming. Dalton Trumbo, author of the famous 1930s antiwar book Johnny Got His Gun wrote and directed this film adaptation. In 1947, he refused to testify before a congressional committee investigating alleged Communist infiltration of the film industry. Blacklisted for nearly a decade, he wrote numerous scripts under pseudonyms including Roman Holiday and Gun Crazy until he was finally credited for his work on Exodus and Spartacus in 1960.

* Includes a limited-edition reproduction of the film poster in-pack.

* Metallica Music video for 'One', featuring footage from the film.


Hollywood screenwriter Dalton Trumbo directed just one film in his career, but it was a doozy: Johnny Got His Gun, Trumbo’s 1971 adaptation of his 1939 novel and a work that has long been considered one of the most powerful anti-war movies ever produced. Ironically, though, there’s very little war in it, and nothing in the way of blood and guts. Instead, what we get is the tortured tale of one Joe Bonham (Timothy Bottoms), a callow 18-year-old who goes off to World War I because he believes that fighting for his country is the right thing to do. But when an officer orders some men to leave their trench and bury a dead enemy soldier, Joe is hit by a mortar shell and left without arms, legs, or a face (he can’t see, hear, or speak). Doctors assume that his cognitive brain function is gone as well, but in fact he can still think, reason, and feel (figuratively and literally); as a result, he has been consigned to a life far worse than death. The film intermingles scenes of Joe in an Army hospital as he gradually comes to understand his circumstances (we never actually see him, as he’s covered by a mask and sheets) with the various flashbacks, memories, and hallucinations he experiences during that process. The former, during which Bottoms supplies Joe’s thoughts in voice-over, are in black & white; the latter, which range from childhood memories (Joe’s father is played by Jason Robards) to bizarre fantasies like playing cards with Jesus Christ (Donald Sutherland), are in color, bathed in a kind of dreamy glow that’s countered by a heavy and persistent sense of dread. To be sure, Johnny Got His Gun has its heavy-handed, pretentious moments. But this is a smart, disturbing, and somber film that stands out in a genre (i.e., war movies) that unfortunately is never irrelevant. An excellent batch of bonus features includes an hour-long profile of Trumbo (who was jailed for contempt of Congress during the Communist witch hunts of the ‘40s and ‘50s, then blacklisted by Hollywood), a new interview with Bottoms, a 1940 radio adaptation of the story (featuring James Cagney as Joe), and even the Metallica music video “One,” which features extensive footage from the film. --Sam Graham