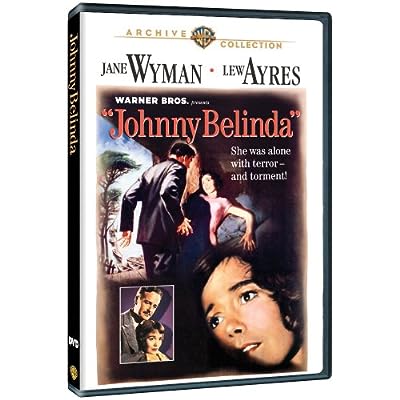 Price: $19.99
As of 2023-02-02 07:53:18 UTC (more info)
Product prices and availability are accurate as of 2023-02-02 07:53:18 UTC and are subject to change. Any price and availability information displayed on http://www.amazon.com/ at the time of purchase will apply to the purchase of this product.
Availability: Not Available - stock arriving soon
Buy Now from Amazon
Product Information (more info)
CERTAIN CONTENT THAT APPEARS ON THIS SITE COMES FROM AMAZON SERVICES LLC. THIS CONTENT IS PROVIDED 'AS IS' AND IS SUBJECT TO CHANGE OR REMOVAL AT ANY TIME.

Jane Wyman ("Magnificent Obsession," "The Yearling," TV's "Falcon Crest") won an Academy Award for her moving portrayal of a deaf mute who lives in a remote Nova Scotia fishing village. After learning sign language from a compassionate doctor, she is raped by a local bully and gives birth to an illegitimate son, Johhny Belinda. When the rapist returns to claim his son, she fights to keep him. Nominated for 12 Academy Awards, including Best Picture, Story and Cinematography. Agnes Moorehead (TV's "Bewitched," "Citizen Kane") plays Wyman's unsympathetic sister and received an Oscar nomination for Best Supporting Actress. Charles Bickford ("The Song of Bernadette," TV's "The Virginian") received on Oscar nomination as Wyman's stoic fisherman father. Lew Ayres' ("All Quiet on the Western Front") sensitive portrayal of the compassionate doctor caught in the crossfire earned an Oscar nomination. A monumental cinematic achievement.