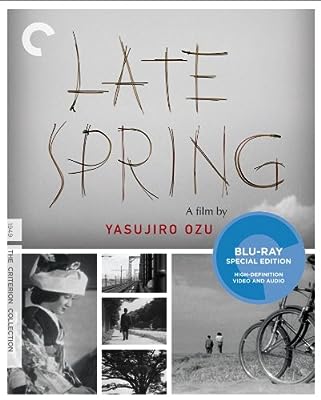 Price: $27.99
As of 2022-10-07 19:54:54 UTC (more info)
Product prices and availability are accurate as of 2022-10-07 19:54:54 UTC and are subject to change. Any price and availability information displayed on http://www.amazon.com/ at the time of purchase will apply to the purchase of this product.
Availability: Not Available - stock arriving soon
Buy Now from Amazon
Product Information (more info)
CERTAIN CONTENT THAT APPEARS ON THIS SITE COMES FROM AMAZON SERVICES LLC. THIS CONTENT IS PROVIDED 'AS IS' AND IS SUBJECT TO CHANGE OR REMOVAL AT ANY TIME.

Yasujiro Ozu's Late Spring is one of the greatest films on the relationship and bond between a father and daughter. The father Shukichi is a professor, a widower, who is greatly absorbed in his work. His 27 year old unmarried daughter, Noriko, runs his household for him, and the both are them are perfectly content with this arrangement until Shukichi's sister declare's that it is about time her niece finds a suitor and gets married. Noriko is in her late 20s and in Japanese culture in 1949 it is not appropriate for a single woman to be still living at home. Shukichi's sister warns him that it is his responsibility to find his daughter a man who can support her because when he is dead his daughter will be all alone in the world. When Noriko opposes the idea of marriage, her father lies and tells her he is going to remarry, sacrificing his own comfort for the future of his daughter. What makes Late Spring such a deeply sad story is that the father and daughter are forced into doing something that neither of them want to do and because of that it will result in resentment and unhappiness for the both of them.

One of the most powerful of the family portraits by Yasujiro Ozu (Tokyo Story), Late Spring tells the story of a widowed father who feels compelled to marry off his beloved only daughter. Eminent Ozu players Chishu Ryu (There Was a Father) and Setsuko Hara (Late Autumn) command this poignant tale of love and loss in postwar Japan, which remains as potent today as ever and as strong a justification for its maker's inclusion in the pantheon of cinema's greatest directors.

Yasujirô Ozu is the most curious of all directors because most of his films focused on family, marriage, children and weddings, when Ozu himself was a bachelor and lived with his mother his whole life, dying alone months after she died. Like all of Ozu's films, Late Spring's pacing is slow or as critic David Bordwell prefers to describe it, "calm," and Ozu's narrative strategies in his films are fascinating because important events are often not shown on-screen, only revealed later through dialogue. For example, Ozu does not once show Noriko's wedding, which is because the marriage is not what is truly important to the story. The beautiful and legendary Setsuko Hara, who plays the character of Noriko was a great and loyal actress that would drop everything to work with Ozu and she is usually looked at as Ozu's leading lady. When the studio asked Ozu to consider a different actress for his second film, he refused to even make it without using Hara.