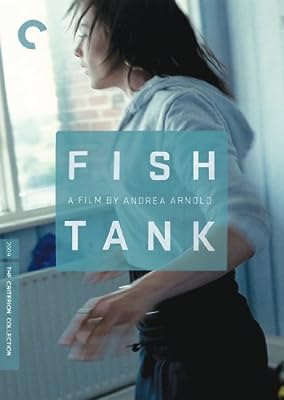 Price: $17.99
As of 2022-12-09 06:09:08 UTC (more info)
Product prices and availability are accurate as of 2022-12-09 06:09:08 UTC and are subject to change. Any price and availability information displayed on http://www.amazon.com/ at the time of purchase will apply to the purchase of this product.
Availability: Not Available - stock arriving soon
Buy Now from Amazon
Product Information (more info)
CERTAIN CONTENT THAT APPEARS ON THIS SITE COMES FROM AMAZON SERVICES LLC. THIS CONTENT IS PROVIDED 'AS IS' AND IS SUBJECT TO CHANGE OR REMOVAL AT ANY TIME.

British director Andrea Arnold (Red Road) won the Cannes Jury Prize for the searing and invigorating FISH TANK, about a fifteen-year-old girl, Mia (electrifying newcomer Katie Jarvis), who lives with her mother and sister in the depressed housing projects of Essex. Mia's adolescent conflicts and emerging sexuality reach boiling points when her mother's new boyfriend (a lethally attractive Michael Fassbender [Hunger, Inglourious Basterds]) enters the picture. In her young career, Arnold has already proven herself to be a master of social realism (evoking the work of Mike Leigh and Ken Loach), investing her sympathetic portraits of dead-end lives with a poetic, earthy sensibility all her own. FISH TANK heralds the official arrival of a major new filmmaker.

The Criterion release Fish Tank, from director Andrea Arnold (Red Road), is a bittersweet drama that belongs entirely to its depressed and rebellious teenage protagonist, Mia Williams (Katie Jarvis), as she roots around her Essex housing project looking for love and fun. Waves of ennui wash over her as Mia gets into negligible amounts of trouble to relieve herself, trying to set someone's horse free, digging through junkyards or getting thugs to buy her beer, for example, and nightly coming home to nasty feuds with her trashy alcoholic mother, Joanne (Kierston Wareing), and younger sister, Tyler (Rebecca Griffiths). But this coming-of-age tale's narrative becomes exponentially more complex once Mia's mom brings home her new boyfriend, Connor (Michael Fassbender), who seems destined to cause even greater rifts between these sexually hungry mother and daughters. The beauty of Fish Tank's cinematography enhances the tension of its story, and while the plot unravels slowly, it does so with grace and intrigue, thanks to Jarvis's rich portrayal of a confused and furious 15-year-old. But it's the development of Mia as a palpable character that carries the film; her deep interest in hip-hop dancing, for example, lends itself to a subtext about the need for activity and a creative outlet during adolescence. Mia is such a sympathetic character that one can hardly help feel her frustration at being prisoner, as she sees it, in her own troubled home. Fish Tank has the hallmarks of great entertainment, such as charming and romantic moments, but nevertheless it manages to feel convincing as documentary as the camera trails Mia meandering through her dissatisfying daily life. It has the quiet, stylish feel of Sofia Coppola's Virgin Suicides but is arguably better for its deeper, truer treatment of character and conflict. --Trinie Dalton