Film Noir Double Feature (They Live by Night / Side Street) 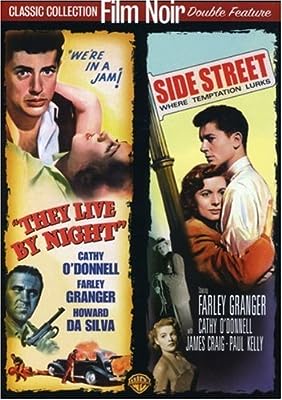 Price: $20.97
As of 2023-02-01 10:44:39 UTC (more info)
Product prices and availability are accurate as of 2023-02-01 10:44:39 UTC and are subject to change. Any price and availability information displayed on http://www.amazon.com/ at the time of purchase will apply to the purchase of this product.
Availability: Not Available - stock arriving soon
Buy Now from Amazon
Product Information (more info)
CERTAIN CONTENT THAT APPEARS ON THIS SITE COMES FROM AMAZON SERVICES LLC. THIS CONTENT IS PROVIDED 'AS IS' AND IS SUBJECT TO CHANGE OR REMOVAL AT ANY TIME.

They Live By Night/ Side Street (DVD) (Multi-title)]]>

Two stellar noir directors share a disc and costars, Farley Granger and the ethereal Cathy O'Donnell. They Live by Night (1948) was Nicholas Ray's maiden effort, and kinetically and emotionally the director found natural rapport with the spooked-animal vulnerability of his hero and heroine. This was the first film version of Edward Anderson's Depression-era novel Thieves Like Us (adapted again a quarter-century later by Robert Altman), and its tale of a young rural misfit drawn into more violent crime by older, harder fellow escapees from a prison farm anticipates the spirit of Ray's '50s teen classic Rebel Without a Cause. Side Street (1949) is fascinating as a bridge between Anthony Mann's great series of noirs shot by John Alton and the Western genre Mann would soon master. Working this time with a conventional MGM cameraman (Joseph Ruttenberg), the director demonstrates that the terrific "eye" that gave us T-Men, Border Incident, et al. was at least as much Mann's as Alton's, and he visualizes Manhattan as a collection of jagged skylines and deep, shadowed canyons. The script (by Sydney Boehm) involves a mail carrier (Granger) who, worried about taking proper care of his pregnant wife (O'Donnell), impulsively swipes an envelope full of money. Hard upon that "one false step," the family man finds himself caught up in a dark scheme involving blackmail and, several times over, murder. --Richard T. Jameson