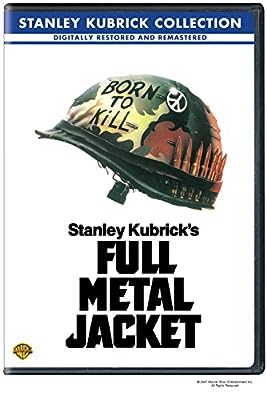 Price: $5.97
As of 2022-12-09 12:56:41 UTC (more info)
Product prices and availability are accurate as of 2022-12-09 12:56:41 UTC and are subject to change. Any price and availability information displayed on http://www.amazon.com/ at the time of purchase will apply to the purchase of this product.
Availability: Not Available - stock arriving soon
Buy Now from Amazon
Product Information (more info)
CERTAIN CONTENT THAT APPEARS ON THIS SITE COMES FROM AMAZON SERVICES LLC. THIS CONTENT IS PROVIDED 'AS IS' AND IS SUBJECT TO CHANGE OR REMOVAL AT ANY TIME.

Director Stanley Kubrick rips the skin from the face of war to expose the dehumanizing effect of the military on the people fed to its emotional meat grinder in Full Metal Jacket. Through the eyes of an 18-year-old recruit--from his first days in the seeming hell of Marine Corps boot camp as his superiors try to strip of him his individuality and re-create him as a Marine, to the hell of the 1968 Tet offensive, Kubrick reveals the damage done to the collective human soul by the inhumanity of war. Based on the novel The Short-Timers by Gustav Hasford.