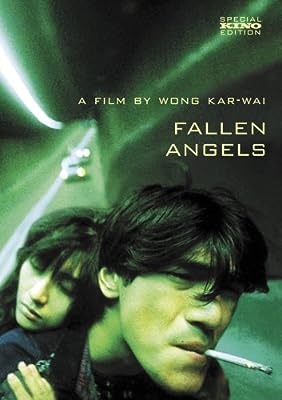 Price:
As of 2022-08-13 13:06:44 UTC (more info)
Product prices and availability are accurate as of 2022-08-13 13:06:44 UTC and are subject to change. Any price and availability information displayed on http://www.amazon.com/ at the time of purchase will apply to the purchase of this product.
Availability: Not Available - stock arriving soon
Buy Now from Amazon
Product Information (more info)
CERTAIN CONTENT THAT APPEARS ON THIS SITE COMES FROM AMAZON SERVICES LLC. THIS CONTENT IS PROVIDED 'AS IS' AND IS SUBJECT TO CHANGE OR REMOVAL AT ANY TIME.

Commonly regarded as one of the most influential directors of contemporary cinema, Wong Kar-Wai (Happy Together, In the Mood for Love) has developed a signature style that employs bold, experimental uses of photography, music, and editing to capture the tension of the new millennium. Originally intended to be a third story in his now classic Chungking Express, Fallen Angels has emerged as what some critics have come to consider his (quintessential work.) Set in the neon-washed underworld of present day Hong Kong, Fallen Angels intertwines exhilarating tales of love and isolation, primarily the unconsummated love affair between a contract Killer (Leon Lai Ming) and the ravishing female Agent (Michele Reis) who books his assignments and cleans up after his jobs.