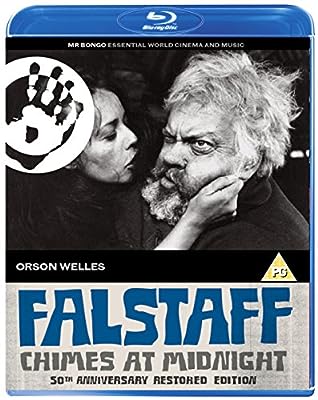 Price: $14.99
As of 2022-12-09 04:29:56 UTC (more info)
Product prices and availability are accurate as of 2022-12-09 04:29:56 UTC and are subject to change. Any price and availability information displayed on http://www.amazon.com/ at the time of purchase will apply to the purchase of this product.
Availability: Not Available - stock arriving soon
Buy Now from Amazon
Product Information (more info)
CERTAIN CONTENT THAT APPEARS ON THIS SITE COMES FROM AMAZON SERVICES LLC. THIS CONTENT IS PROVIDED 'AS IS' AND IS SUBJECT TO CHANGE OR REMOVAL AT ANY TIME.

On the brink of Civil War, King Henry IV (John Gielgud) attempts to consolidate his reign while fretting with unease over his son's seeming neglect of his royal duties. Hal (Keith Baxter), the young Prince, openly consorts with Sir John Falstaff (Orson Welles) and his company of "Diana's foresters, Gentlemen of the shade, Minions of the moon". Hal's friendship with the fat knight substitutes for his estrangement from his father. Both Falstaff and the King are old and tired; both rely on Hal for comfort in their final years, while the young Prince, the future Henry V, nurtures his own ambitions. Orson Welles considered Chimes at Midnight his personal favorite of all his films. Perhaps the most radical and groundbreaking of all Shakespeare adaptations, the film condenses the Bard's Henriad cycle into a single focused narrative. It's international cast comprises of Jeanne Moreau, Fernando Rey, Margaret Rutherford, and Ralph Richardson as the narrator, in addition to Welles and Gielgud. The film's harrowing war scenes have proven especially influential, cited in Kenneth Branagh's Henry V as well as Mel Gibson's Braveheart.