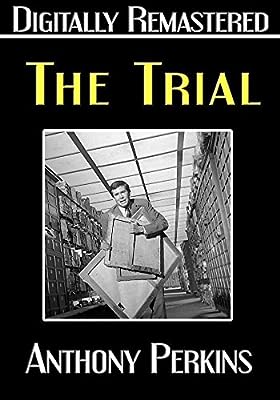 Price: $9.99
As of 2022-10-02 21:29:26 UTC (more info)
Product prices and availability are accurate as of 2022-10-02 21:29:26 UTC and are subject to change. Any price and availability information displayed on http://www.amazon.com/ at the time of purchase will apply to the purchase of this product.
Availability: Not Available - stock arriving soon
Buy Now from Amazon
Product Information (more info)
CERTAIN CONTENT THAT APPEARS ON THIS SITE COMES FROM AMAZON SERVICES LLC. THIS CONTENT IS PROVIDED 'AS IS' AND IS SUBJECT TO CHANGE OR REMOVAL AT ANY TIME.

The legendary Orson Welles directs this gripping psychological thriller about an unassuming office worker who is arrested and stands trial, but is never made aware of his charges.

When Josef K (Anthony Perkins, â€œPsychoâ€) is condemned for an unnamed crime in an unnamed country, he is forced to seek his own justice through a labyrinth of bureaucracy. Along the way, he becomes involved with three women â€“ portrayed by Jeanne Moreau, Romy Schneider and Elsa Martinelli -- who in their own individual ways are functions of the system that persecutes him.

Welles himself considered â€œThe Trial,â€ which is an adaptation of the Franz Kafka novel, to be one of his finest films.