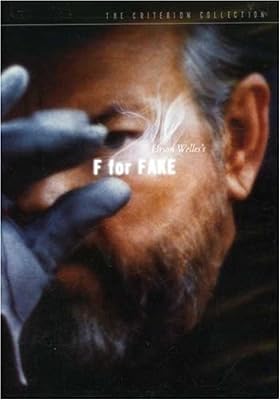 Price: $23.34
As of 2022-10-04 10:42:05 UTC (more info)
Product prices and availability are accurate as of 2022-10-04 10:42:05 UTC and are subject to change. Any price and availability information displayed on http://www.amazon.com/ at the time of purchase will apply to the purchase of this product.
Availability: Not Available - stock arriving soon
Buy Now from Amazon
Product Information (more info)
CERTAIN CONTENT THAT APPEARS ON THIS SITE COMES FROM AMAZON SERVICES LLC. THIS CONTENT IS PROVIDED 'AS IS' AND IS SUBJECT TO CHANGE OR REMOVAL AT ANY TIME.

Trickery. Deceit. Magic. In Orson Welles' free-form documentary, the legendary filmmaker (and self-described charlatan) gleefully engages the central preoccupation of his career-the tenuous line between truth and illusion, art and lies. Beginning with portraits of world-renowned art forger Elmyr de Hory and his equally devious biographer, Clifford Irving, Welles goes on a dizzying cinematic journey that simultaneously exposes and revels in fakery and fakers of all stripes-not the least of which is Welles himself. Charming and poignant, F for Fake is an inspired prank and a searching examination of the essential duplicity of cinema. Criterion's two-disc DVD edition also features an introduction by Peter Bogdanovich, audio commentary by director of photography Gary Graver, an hour long documentary on Welles' unfinished projects, a documentary on the life and works of de Hory, and the theatrical trailer.

To call Orson Welles's F For Fake a documentary would be somewhat deceitful, but deceit itself is very much the subject of this curious film essay. Welles ruminates on the nature of artistic fakery through two examples, that of infamous art forger Elmyr de Hory and the writer Clifford Irving, whose bogus autobiography of Howard Hughes set off a minor media flurry in the 1970s. Postmodernist that he is, Wells then proceeds to narrate and edit the film in such a perversely frenetic way as to blur the lines between what is real and what is deception, making for an often confusing but engaging work of art in itself. We even see the footage we've been watching as it's being spliced together in Welles's editing room. The specter of Welles's often maligned later career hangs over the proceedings like a challenge--is he going to actually complete this strange movie about chicanery, or will it become one of the many unfinished experiments of his twilight years? Happily, Welles concludes the proceedings with a delightful sequence about Picasso, lust, and what constitutes real art. F For Fake is a fine example of a master filmmaker who had at least a couple tricks left up his sleeve. --Ryan Boudinot