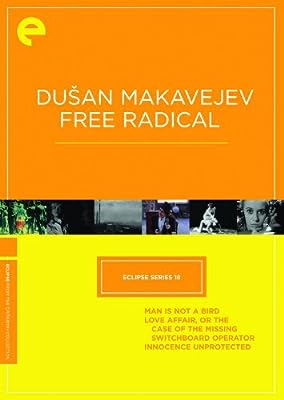 Price: $27.03
As of 2022-10-04 17:21:55 UTC (more info)
Product prices and availability are accurate as of 2022-10-04 17:21:55 UTC and are subject to change. Any price and availability information displayed on http://www.amazon.com/ at the time of purchase will apply to the purchase of this product.
Availability: Not Available - stock arriving soon
Buy Now from Amazon
Product Information (more info)
CERTAIN CONTENT THAT APPEARS ON THIS SITE COMES FROM AMAZON SERVICES LLC. THIS CONTENT IS PROVIDED 'AS IS' AND IS SUBJECT TO CHANGE OR REMOVAL AT ANY TIME.

There's never been another filmmaker quite like Du an Makavejev. Even in the 1960s, when all of cinema's rules seemed to be breaking down and artists such as Godard, Cassavetes, and Marker were dissolving the boundary between fiction and documentary, Yugoslavia's Makavejev stood alone. His films about political and sexual liberation were revolutionary, raucous, and ribald. Across these, his wild, collagelike first three films, Makavejev investigates with a tonic mix of earnestness and whimsy love, death, and work; the legacy of war and the absurdity of daily life in a Communist state; criminology and hypnosis; strudels and strongmen.

MAN IS NOT A BIRD
Du an Makavejev 1965
MAN IS NOT A BIRD is an antic, free-form portrait of the love lives of two less-than-heroic men who labor in a copper factory. This is one of cinema's most assured and daring debuts.

LOVE AFFAIR, OR THE CASE OF THE MISSING SWITCHBOARD OPERATOR
Du an Makavejev 1967
This story of the tragic romance between a young telephonist (Eva Ras) and a middle-aged rodent sanitation specialist (Slobodan Aligrudic) in Belgrade is an endlessly surprising, time-shifting exploration of love and freedom.

INNOCENCE UNPROTECTED
Du an Makavejev 1968
This utterly unclassifiable film assembled from the lost' footage of the first Serbian talkie, made during the Nazi occupation is one of Makavejev's most freewheeling farces.

Eclipse Series 2: The Documentaries of L...