Eclipse Series 32: Pearls of the Czech New Wave (Pearls of the Deep, Daisies, A Report on the Party and Guests, Return of the Prodigal Son, Capricious Summer, The Joke) (Criterion Collection) 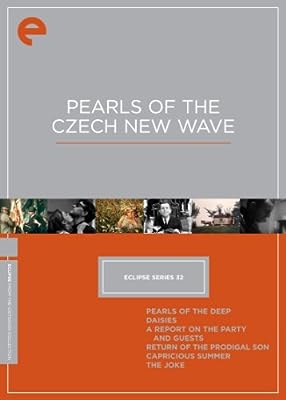 Price:
As of 2021-12-02 13:35:14 UTC (more info)
Product prices and availability are accurate as of 2021-12-02 13:35:14 UTC and are subject to change. Any price and availability information displayed on http://www.amazon.com/ at the time of purchase will apply to the purchase of this product.
Availability: Not Available - stock arriving soon
Buy Now from Amazon
Product Information (more info)
CERTAIN CONTENT THAT APPEARS ON THIS SITE COMES FROM AMAZON SERVICES LLC. THIS CONTENT IS PROVIDED 'AS IS' AND IS SUBJECT TO CHANGE OR REMOVAL AT ANY TIME.

PEARLS OF THE DEEP
Jiri Menzel, Vera Chytilova, Jaromil Jires… 1966
A manifesto of sorts for the Czech New Wave, this five-part anthology shows off the breadth of expression and the versatility of the movement's directors.

DAISIES
Vera Chytilova 1966
Daisies is an aesthetically and politically adventurous film that's widely considered one of the great works of feminist cinema.

A REPORT ON THE PARTY AND GUESTS
Jan Nemec 1966
In Jan Nemec's surreal fable, a picnic is rudely transformed into a lesson in political hierarchy when a handful of mysterious authority figures show up.

RETURN OF THE PRODIGAL SON
Evald Schorm 1967
This raw psychological drama about an engineer unable to adjust to the world around him following his suicide attempt is at heart a scathing portrait of social alienation and moral compromise.

CAPRICIOUS SUMMER
Jiri Menzel 1968
Two years after his worldwide hit Closely Watched Trains, Jiri Menzel directed this amusing idyll about three middle-aged men whose mellow summer is interrupted by the arrival of a circus performer and his beautiful assistant.

THE JOKE
Jaromil Jires 1969
Jaromil Jires's brilliant adaptation of Milan Kundera's novel tells the fragmentary tale of a man expelled from the Communist Party because of a political joke.

The Shop On Main Street (The Criterion C...

Loves of a Blonde (The Criterion Collect...

The Firemen's Ball (The Criterion Collec...