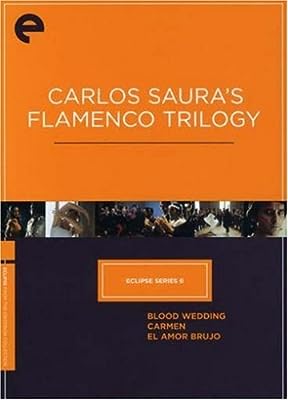 Price: $44.95
As of 2022-10-03 11:41:34 UTC (more info)
Product prices and availability are accurate as of 2022-10-03 11:41:34 UTC and are subject to change. Any price and availability information displayed on http://www.amazon.com/ at the time of purchase will apply to the purchase of this product.
Availability: Not Available - stock arriving soon
Buy Now from Amazon
Product Information (more info)
CERTAIN CONTENT THAT APPEARS ON THIS SITE COMES FROM AMAZON SERVICES LLC. THIS CONTENT IS PROVIDED 'AS IS' AND IS SUBJECT TO CHANGE OR REMOVAL AT ANY TIME.

One of Spanish cinema’s great auteurs, Carlos Saura brought international audiences closer to the art of his country’s dance than any other filmmaker, before or since. In his Flamenco Trilogy—Blood Wedding, Carmen, and El amor brujo—Saura merged his passion for music with his ongoing exploration of Spanish national identity. All starring and choreographed by legendary dancer Antonio Gades, the films feature thrilling physicality and electrifying cinematography and editing—colorful paeans to bodies in motion as well as to the cinema that so eloquently, and artfully, captured them.

In the wake of Criterion's release of Cría Cuervos, his haunting Franco-era allegory, comes Carlos Saura's famed trilogy, crafted in collaboration with producer Emiliano Piedra, cinematographer Teodoro Escamilla, and choreographer Antonio Gades. Blood Wedding (1981) starts out like one of Robert Altman's behind-the-scenes efforts. As the reed-thin Gades describes his initiation into dance, Saura captures every backstage detail, from the bickering of the musicians to the mementos the dancers scatter about their stations. The action culminates in a dress rehearsal of Alfredo Manas's Bodas de Sangre, a flamenco-ballet version of Federico García Lorca's play. On the day of her betrothal, the Bride (Cristina Hoyos) runs off with Leonardo (Gades), a married man. To appease his Mother (Pilar Cárdenas), the Groom (Juan Antonio Jiménez) sets out to avenge the family name.

In Carmen (1983), Saura's biggest international hit, he takes on Georges Bizet's operatic adaptation of Prosper Mérimée's novella. Fiction bleeds into fact as the performers incarnate their parts. The narrative begins with Gades's search for a dancer to play the tragic heroine. He finds her in headstrong hoofer Carmen (Laura del Sol) with whom he embarks on an affair. As with Gades, Cristina Hoyos plays a character much like herself, a dancer relegated to a supporting role (composer/guitarist Paco de Lucía also appears under his own name). Instead of a full-length performance, Carmen proceeds through a series of rehearsals and offstage encounters. The more time he spends with his leading lady--described in the text as a "she-wolf"--the more possessive Gades becomes. He demands fidelity, Carmen longs for freedom. Finally, in a fit of rage, he solves their problem--permanently. Manuel de Falla's ballet El Amor Brujo (1986) opens on a stage set made up like a gypsy village. (As with the previous films, there is no audience, though the dancers never break character.) Two men agree that their children, José and Candela, will marry when they are grown. The years go by and a wedding comes to pass, though Carmelo (Gades) secretly desires Candela (Hoyos), and Lucía (Carmen's Laura del Sol) feels the same about José (Jiménez). Then José is killed in a knife fight, but every evening Candela dances with his ghost, so she remains blind to Carmelo’s devotion. Of the trilogy, El Amor Brujo ("Love, the Magician") features the least dancing, making it less satisfying, but just as passionate--and more optimistic--than its tragic predecessors. For aficionados of dance on film, Carlos Saura's Flamenco Trilogy belongs on the shelf with The Red Shoes and West Side Story (his trio is also filled with finger-snaps and switchblades). For those who wish to dig deeper, Saura followed up with the related documentaries Sevillanas (1992) and Flamenco (1995), which would have rounded out this set nicely. As with the other entries in Criterion's Eclipse Series (focusing on international masters, like Ingmar Bergman and Louis Malle), this collection may be devoid of extras, but it still represents one of the best deals around. --Kathleen C. Fennessy