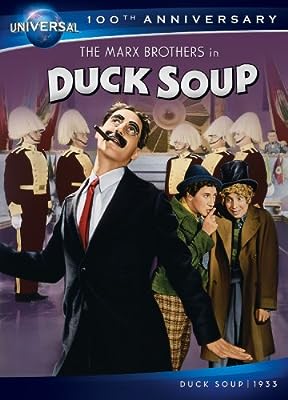 Price: $14.98
As of 2023-02-01 13:56:08 UTC (more info)
Product prices and availability are accurate as of 2023-02-01 13:56:08 UTC and are subject to change. Any price and availability information displayed on http://www.amazon.com/ at the time of purchase will apply to the purchase of this product.
Availability: Not Available - stock arriving soon
Buy Now from Amazon
Product Information (more info)
CERTAIN CONTENT THAT APPEARS ON THIS SITE COMES FROM AMAZON SERVICES LLC. THIS CONTENT IS PROVIDED 'AS IS' AND IS SUBJECT TO CHANGE OR REMOVAL AT ANY TIME.

Groucho, Harpo, Chico and Zeppo Marx are at their very best in the political satire Duck Soup which is often regarded as the comedy legends’ funniest and most popular film. After being appointed dictator of Freedonia, Rufus T. Firefly (Groucho) proceeds to bring the mythical nation to a halt by showing up late and insulting everyone at his inauguration. Hoping to oust the unfit new leader, two spies (Harpo and Chico) are sent from the neighboring Sylvania. Soon enough, war is declared between the two nations with outrageous results. Recognized on the AFI’s 100 Years…100 Laughs list and selected for the National Film Registry, this comedy classic features some of the most hilarious sequences every filmed, including the famous mirror sequence and final battle scene, and remains as entertaining and relevant today as it did when it was first released in 1933.