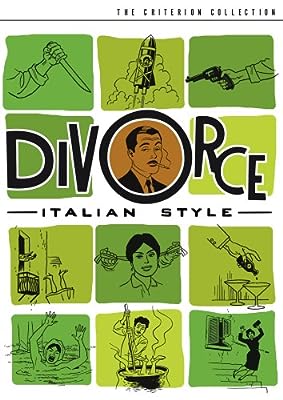 Price: $29.99
As of 2022-10-04 08:16:48 UTC (more info)
Product prices and availability are accurate as of 2022-10-04 08:16:48 UTC and are subject to change. Any price and availability information displayed on http://www.amazon.com/ at the time of purchase will apply to the purchase of this product.
Availability: Not Available - stock arriving soon
Buy Now from Amazon
Product Information (more info)
CERTAIN CONTENT THAT APPEARS ON THIS SITE COMES FROM AMAZON SERVICES LLC. THIS CONTENT IS PROVIDED 'AS IS' AND IS SUBJECT TO CHANGE OR REMOVAL AT ANY TIME.

Baron Ferdinando Cefalù (Marcello Mastroianni) longs to marry his nubile cousin Angela, but one obstacle stands in his way: his fatuous and fawning wife, Rosalia. His solution? Since divorce is illegal, he will devise a scenario wherein he can catch his spouse in the arms of another and murder her to save his honor-a lesser offense. Criterion is proud to present director Pietro Germi's hilarious and cutting satire of Italy's hypocritical judicial system and male-dominated culture, winner of the 1962 Academy Award for Best Original Screenplay, in a two-disc DVD edition that also features a documentary on the director, new interviews with the actors and screenwriter, screen-test footage, and more.

Divorce Italian Style is a comedy milestone--a brilliant, biting satire that was originally conceived as a drama; directed with nonstop inventiveness by a filmmaker who had never done comedy; and featuring an actor who, though not even among the first dozen players considered, cemented his international stardom with this performance. The movie also marked a breakthrough for foreign film in America, winning popular as well art-house success, Academy Award nominations for director Pietro Germi and star Marcello Mastroianni, and--the first of only a few foreign-language films to do so--the Oscar itself for Original Screenplay.

On the sun-blasted island of Sicily, Baron Ferdinand "Fefè" Cefalù (Mastroianni) breaks out of his heat- and boredom-induced stupor long enough to be smitten with mad passion for his 16-year-old cousin Angela (Stefania Sandrelli). But he's married--to Rosalia (Daniela Rocca), she of the unfortunate mustache--and the Italian Penal Code gives him no way out... except, of course, for catching his wife in adultery and availing himself of the patriarchal license to commit a "crime of honor." So Fefè searches for a way to fling Rosalia into the arms of another man.