Dziga Vertov: The Man with the Movie Camera and Other Newly-Restored Works [Blu-ray] 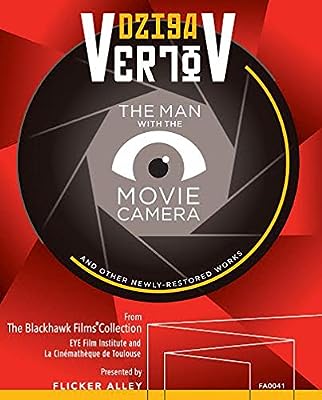 Price: $39.95
As of 2023-02-05 22:33:45 UTC (more info)
Product prices and availability are accurate as of 2023-02-05 22:33:45 UTC and are subject to change. Any price and availability information displayed on http://www.amazon.com/ at the time of purchase will apply to the purchase of this product.
Availability: Not Available - stock arriving soon
Buy Now from Amazon
Product Information (more info)
CERTAIN CONTENT THAT APPEARS ON THIS SITE COMES FROM AMAZON SERVICES LLC. THIS CONTENT IS PROVIDED 'AS IS' AND IS SUBJECT TO CHANGE OR REMOVAL AT ANY TIME.

Vertov took the language of sound to a new level when making his masterpiece Man With the Movie Camera (also called Man With a Movie Camera) which is looked at as one of the most revolutionary silent films ever made. It was said that the average film shot length (ASL) was around 11.2 seconds in the year 1929. When Man With the Movie Camera was released it had an ASL of 2.3 seconds, which is four times faster than most films of that time and the speed of the average action film made today. And so when people first laid there eyes on images and edits that were flying passed them at a speed of 2.3 seconds in the year 1929, it must of stunned them. It horrified the author of the New York Times as he wrote in his review of the film, "The producer, Dziga Vertov, does not take into consideration the fact that the human eye fixes for a certain space of time that which holds the attention."

Dziga Vertov: The Man with the Movie Camera and Other Newly-Restored Works
Deluxe Blu-ray Edition

"I am an eye. A mechanical eye. I am the machine that reveals the world to you as only the machine can see it.
- Dziga Vertov ("Kino-Eye")

These words, written in 1923 (only a year after Robert Flaherty s Nanook of the North was released) reflect the Soviet pioneer s developing approach to cinema as an art form that shuns traditional or Western narrative in favor of images from real life. They lay the foundation for what would become the crux of Vertov s revolutionary, anti-bourgeois aesthetic wherein the camera is an extension of the human eye, capturing the chaos of visual phenomena filling the universe. Over the next decade-and-a-half, Vertov would devote his life to the construction and organization of these raw images, his apotheosis being the landmark 1929 film The Man with the Movie Camera. In it, he comes closest to realizing his theory of Kino-Eye, creating a new, more ambitious and more significant picture than what the eye initially perceives.

Now thanks to the extraordinary restoration efforts of Lobster Films, Blackhawk Films® Collection, EYE Film Institute, Cinémathèque de Toulouse, and the Centre National de la Cinématographie Flicker Alley is able to present the four films featured on Dziga Vertov: The Man with the Movie Camera and Other Newly-Restored Works in a brand-new, Blu-ray edition.

The Man with the Movie Camera and Kino Eye feature musical accompaniments by Alloy Orchestra and Robert Israel respectively, while original soundtracks have been restored for Enthusiasm and Three Songs About Lenin.

Bonus features include Kino Pravda #21, a newsreel made in 1925 to mark the first anniversary of Lenin s death, as well as a booklet featuring information about Vertov s life and works.

Right in the beginning of Man With the Movie Camera the inter-titles lets the audience know what kind of film to expect. Vertov informs us the film is an experiment in the cinematic communication of visible events, without the aid of inter-titles, without the aid of a scenario and without the aid of a theater. He states the film is simply a series of images that is creating an absolute language of cinema by separating the language from the theater and literature. Man With the Movie Camera has a basic organizing format and a form of structural layout throughout the film. Vertov would open from dusk and close at dawn, a complete 24 hour single day throughout three cities: Moscow, Kiev and Odessa. It took Vertov nearly a total of four years to film this day with the help of his wife Yelizaveta Svilova who supervised the editing which involved nearly 1,7775 separate shots of film; which is a staggering amount of film to edit provided that most of these shots consisted of nearly set-ups.