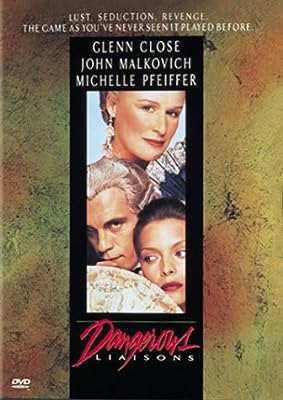 Price: $14.37
As of 2023-02-01 13:53:17 UTC (more info)
Product prices and availability are accurate as of 2023-02-01 13:53:17 UTC and are subject to change. Any price and availability information displayed on http://www.amazon.com/ at the time of purchase will apply to the purchase of this product.
Availability: Not Available - stock arriving soon
Buy Now from Amazon
Product Information (more info)
CERTAIN CONTENT THAT APPEARS ON THIS SITE COMES FROM AMAZON SERVICES LLC. THIS CONTENT IS PROVIDED 'AS IS' AND IS SUBJECT TO CHANGE OR REMOVAL AT ANY TIME.

THE BITING SATIRE ABOUT LOVE AND LUST, PASSION AND DECEPTIONINCLUDES DIRECTOR'S COMMENTARY.

A sumptuously mounted and photographed celebration of artful wickedness, betrayal, and sexual intrigue among depraved 18th-century French aristocrats, Dangerous Liaisons (based on Christopher Hampton's Les Liaisons Dangereuses) is seductively decadent fun. The villainous heroes are the Marquise De Merteuil (Glenn Close) and the Vicomte De Valmont (John Malkovich), who have cultivated their mutual cynicism into a highly developed and exquisitely mannered form of (in-)human expression. Former lovers, they now fancy themselves rather like demigods whose mutual desires have evolved beyond the crudeness of sex or emotion. They ritualistically act out their twisted affections by engaging in elaborate conspiracies to destroy the lives of their less calculating acquaintances, daring each other to ever-more-dastardly acts of manipulation and betrayal. Why? Just because they can; it's their perverted way of getting get their kicks in a dead-end, pre-Revolutionary culture. Among their voluptuous and virtuous prey are fair-haired angels played by Michelle Pfeiffer and Uma Thurman, who have never looked more ripe for ravishing. When the Vicomte finds himself beset by bewilderingly genuine emotions for one of his victims, the Marquise considers it the ultimate betrayal and plots her heartless revenge. Dangerous Liaisons is a high-mannered revel for the actors, who also include Swoosie Kurtz, Mildred Natwick, and Keanu Reeves. --Jim Emerson