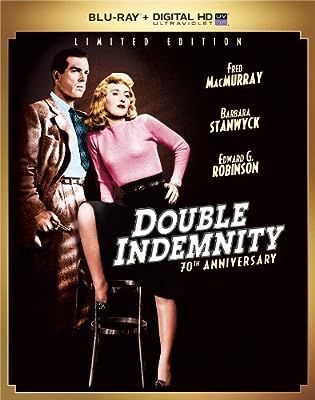 Price: $24.96
Availability: Not Available - stock arriving soon
Buy Now from Amazon
Product Information (more info)
CERTAIN CONTENT THAT APPEARS ON THIS SITE COMES FROM AMAZON SERVICES LLC. THIS CONTENT IS PROVIDED 'AS IS' AND IS SUBJECT TO CHANGE OR REMOVAL AT ANY TIME.

Fred MacMurray and Barbara Stanwyck star in the gripping film noir classic Double Indemnity, directed by Academy Award winner Billy Wilder. A calculating wife (Stanwyck) encourages her wealthy husband to sign a double indemnity policy proposed by smitten insurance agent Walter Neff (MacMurray). As the would-be lovers plot the unsuspecting husband’s murder, they are pursued by a suspicious claims manager (Edward G. Robinson). It’s a race against time to get away with the perfect crime in this suspenseful masterpiece that was nominated for 7 Academy Awards including Best Picture.