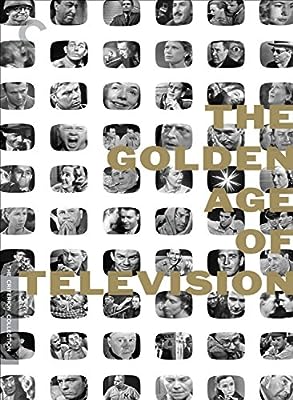 Price: $30.04
As of 2022-11-27 18:36:20 UTC (more info)
Product prices and availability are accurate as of 2022-11-27 18:36:20 UTC and are subject to change. Any price and availability information displayed on http://www.amazon.com/ at the time of purchase will apply to the purchase of this product.
Availability: Not Available - stock arriving soon
Buy Now from Amazon
Product Information (more info)
CERTAIN CONTENT THAT APPEARS ON THIS SITE COMES FROM AMAZON SERVICES LLC. THIS CONTENT IS PROVIDED 'AS IS' AND IS SUBJECT TO CHANGE OR REMOVAL AT ANY TIME.

The hugely popular live American television plays of the 1950s have become the stuff of legend. Combining elements of theater, radio, and filmmaking, they were produced at a moment when TV technology was growing more mobile and art was being made accessible to a newly suburban postwar demographic. These astonishingly choreographed, brilliantly acted, and socially progressive "teleplays" constituted an artistic high for the medium, bringing Broadway-quality drama to all of America. The award-winning programs included in this box set--originally curated for PBS in the early 1980s as the series The Golden Age of Television, featuring recollections from key cast and crew members--were conceived by such up-and-comers as Rod Serling and John Frankenheimer and star the likes of Paul Newman, Mickey Rooney, Rod Steiger, Julie Harris, and Piper Laurie.

Carnival of Souls (The Criterion Collect...