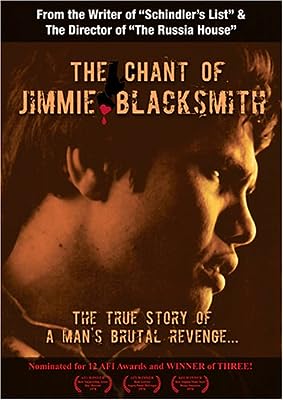 Price: $19.49
As of 2022-10-02 03:31:51 UTC (more info)
Product prices and availability are accurate as of 2022-10-02 03:31:51 UTC and are subject to change. Any price and availability information displayed on http://www.amazon.com/ at the time of purchase will apply to the purchase of this product.
Availability: Not Available - stock arriving soon
Buy Now from Amazon
Product Information (more info)
CERTAIN CONTENT THAT APPEARS ON THIS SITE COMES FROM AMAZON SERVICES LLC. THIS CONTENT IS PROVIDED 'AS IS' AND IS SUBJECT TO CHANGE OR REMOVAL AT ANY TIME.

A part-white Aborigine attacks racism with violence in circa-1900 Australia. Directed by Fred Schepisi.

The Chant of Jimmie Blacksmith is a chilling portrait of a young Australian boy struggling for acceptance in either of the two societies he half-belongs to, the Aborigines and the whites. Based on the life of Jimmy Governor, director Fred Schepisi (Six Degrees of Separation) transforms this turn of the century criminal drama into a tragic identity study, as Jimmy is a victim of sheer racism and nothing else. Jimmy, brilliantly portrayed by Tommy Lewis, is a hard-working and intelligent boy who understands two cultures but occasionally mistakenly assumes that they will overlap. His allies, full-blooded Aborigine brother Mort (Freddy Reynolds), and white wife Gilda (Angela Punch McGregor), are the only characters who treat him with the common decency that we take for granted today. Otherwise, we meet Mr. Newby (Don Crosby) and Mrs. Newby (Ruth Blacknell) among others who hire Jimmy for rural tasks and treat him unjustly from the start. By the time Jimmy seeks revenge by "declaring war" on his offenders, the viewer is apt to empathize with his plight even when he resorts to utter violence. The crux of the plot revolves around Jimmy’s revenge, and the white society’s way of punishing a monster that they, in essence, created. The Chant of Jimmie Blacksmith not only tells a riveting humanist tale, but also is beautifully filmed and offers comparative glimpses into two lifestyles that Americans, especially, may be unfamiliar with. Majestic shots of the Australian desert and the people who have long inhabited it are in stark contrast with the urban scenes of Aborigines in drunken stupors at the hand of then newly introduced alcohol into their culture. In this sense, the film is culturally rich, more akin to dramatized ethnographic documentary. In fact, the extras on this DVD enlighten one as to how the film crew recruited members of this elusive culture to act, and how they enlisted their help for accuracy. Also rewarding is an interview with Tommy Lewis who retells the account of his being cast for the film in a humorous narrative style that elucidates even more entertainingly how he and his many, many "brothers" from his extended family came to agree on his accepting the part and how this film has served to expose a history which is usually buried. —Trinie Dalton