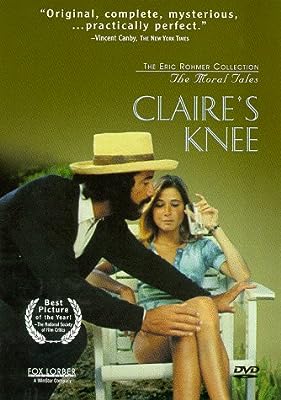 Price: $14.95
As of 2023-02-07 13:29:46 UTC (more info)
Product prices and availability are accurate as of 2023-02-07 13:29:46 UTC and are subject to change. Any price and availability information displayed on http://www.amazon.com/ at the time of purchase will apply to the purchase of this product.
Availability: Not Available - stock arriving soon
Buy Now from Amazon
Product Information (more info)
CERTAIN CONTENT THAT APPEARS ON THIS SITE COMES FROM AMAZON SERVICES LLC. THIS CONTENT IS PROVIDED 'AS IS' AND IS SUBJECT TO CHANGE OR REMOVAL AT ANY TIME.

Abrasive, self-deluded humor tinges the prickly exploration of sexual politics in French director Eric Rohmer's world and it often makes for less-than-comfortable viewing. Though Rohmer has made movies for several decades, his best-known films comprise a cycle loosely dubbed "The Six Moral Tales" (one short, one featurette, and four features), which also includes La Collectionneuse, My Night at Maud's, and Chloe in the Afternoon. Rohmer's comedies are full of the disillusion and jaded settling that come with age and adulthood, and he sharply contrasts cynicism against the naiveté and easy, innocent wisdom of youth. In Claire's Knee, Jean-Claude Brialy plays a diplomat named Jerome Montcharvin, who agrees to housesit a friend's rural but lavish country estate for a month. Jerome appears contented with life as he's recently become engaged to Lucinde, a woman he's known for six years. He takes refuge in the fact that she is his opposite, and placates his doubts by reminding himself that "a woman made for me would bore me." Into this summer idyll and Jerome's predictable, ordered life come two teenage girls who threaten his faithful but passionless ardor for his fiancée. To temper his awakening libido, Jerome pretends to "experiment" with the young women's affections and, in doing so, exposes himself as a cruel, callous man who is clueless as to his true nature. Though a close woman friend cautions him that "in love, there is will," he dismisses the possibility yet in the end performs an act of "pure will" with one of the teens, the lovely Claire, and brashly hurts that which he most desires. Claire's Knee was shot by the brilliant cinematographer, the late Nestor Almendros, and the color palette in the film is a masterpiece of style and scheme. It's a Monet on celluloid, and its visual prowess, combined with the provocative, unsettling theme, earned the National Society of Film Critics' Best Film prize in 1971. (Unfortunately, the first "reel" of the DVD transfer contains several noticeable scratches and the color is also faded and purple.) --Paula Nechak