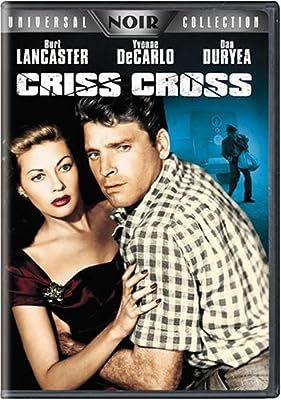 Price: $9.99
As of 2023-01-31 22:38:47 UTC (more info)
Product prices and availability are accurate as of 2023-01-31 22:38:47 UTC and are subject to change. Any price and availability information displayed on http://www.amazon.com/ at the time of purchase will apply to the purchase of this product.
Availability: Not Available - stock arriving soon
Buy Now from Amazon
Product Information (more info)
CERTAIN CONTENT THAT APPEARS ON THIS SITE COMES FROM AMAZON SERVICES LLC. THIS CONTENT IS PROVIDED 'AS IS' AND IS SUBJECT TO CHANGE OR REMOVAL AT ANY TIME.

Inflamed passions, greed, robbery and murder are the sizzling ingredients which make director Robert Siodmak's moody, powerful thriller catch fire. Burt Lancaster stars as a hardworking armored car driver with a fatal attraction to his ex-wife, Ann (Yvonne DeCarlo), now married to notorious hoodlum Slim Dundee (Dan Duryea). Unable to keep himself from her, Lancaster has a secret tryst with Ann, only to be discovered by Dundee. To cover up their affair, Lancaster convinces the hoodlum that he only met Ann to get Dundee's help in robbing an upcoming payroll shipment he will be driving. The hood falls for the lie, which triggers a series of dark and foreboding events that ultimately lead to violence and death. It's classic film noir suspense from the master of the genre.

Carnival of Souls (The Criterion Collect...