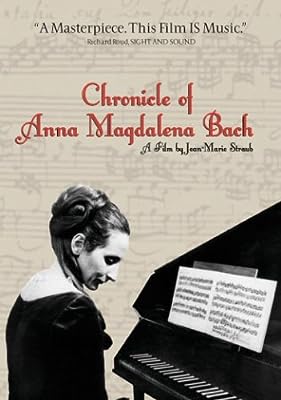 Price: $24.95
As of 2022-10-04 20:47:59 UTC (more info)
Product prices and availability are accurate as of 2022-10-04 20:47:59 UTC and are subject to change. Any price and availability information displayed on http://www.amazon.com/ at the time of purchase will apply to the purchase of this product.
Availability: Not Available - stock arriving soon
Buy Now from Amazon
Product Information (more info)
CERTAIN CONTENT THAT APPEARS ON THIS SITE COMES FROM AMAZON SERVICES LLC. THIS CONTENT IS PROVIDED 'AS IS' AND IS SUBJECT TO CHANGE OR REMOVAL AT ANY TIME.

Chronicle of Anna Magdalena Bach is a brilliant portrait of composer Johann Sebastion Bach which is considered a monument for structural cinema. The serene visuals of the film are juxtaposed with the spoken text, drawn from the letters of manuscripts of the composer, revealing a life of poverty and frustration. The film is a music lover's dream: the choral and instrumental selections are magnificently performed by Gustav Leonhardt and musicians on period instruments. The film covers the years of Bach's life from his marriage to Anna Magdalena to his death in 1748. Richard Roud of Sight and Sound said that it is "at once a love story, a documentary, a socio-political statement, and a film of the music of Bach."

The Lives of Others