Cleo from 5 to 7 (The Criterion Collection) 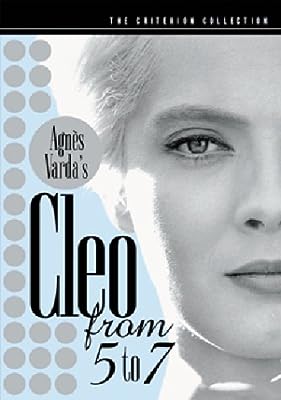 Price: $29.95
Availability: Not Available - stock arriving soon
Buy Now from Amazon
Product Information (more info)
CERTAIN CONTENT THAT APPEARS ON THIS SITE COMES FROM AMAZON SERVICES LLC. THIS CONTENT IS PROVIDED 'AS IS' AND IS SUBJECT TO CHANGE OR REMOVAL AT ANY TIME.

Agnes Varda's Cleo from 5 to 7 is a story about a beautiful self absorbed young pop singer named Cleo who has yet found any real international fame, besides a few hit songs playing on the radio. During two hours of her life the audience will follow Cleo though the city streets, cafes, her luxurious studio apartment and within fancy restaurants, as she is counting down the minutes and the seconds until she learns of the results of a test that will confirm whether or not she has cancer. Cleo’s goes through a sort of transformation and self-discovery throughout these two hours in her life, which is proof that money and beauty can't buy you happiness, and that sometimes all you need when facing death is to love and be loved by another human being.

Director Agnes Varda is looked as by many critics as the 'Godmother' of the French New Wave and yet besides her being a woman, it seems a little unfair to simply describe her like that. When watching several of her films again, her stories seem to be more modern, have much more zest and seem to remain fresh and innovative than many of her French New Wave counterparts. Unlike most of the new wave directors, Varda was trained not just as a filmmaker or a film critic, but as a photographer as well; which is quite obvious through Varda's extraordinary documentary-like cinematography. Varda described Cleo from 5 to 7 as  simply "the portrait of a woman painted onto a documentary about Paris." And yet what makes Cleo from 5 to 7 truly revolutionary is its effect of space and 'real-time brilliantly reconstructed within the confines of its story. Rarely has there been a film that has devoted itself to the challenge of capturing the experience of 'real-time,' besides the cleverly fakery of Alfred Hitchcock’s Rope in 1948 or Alexander Sokurov’s Russian Ark in 2002.

The Gleaners and I

The Beaches Of Agnes