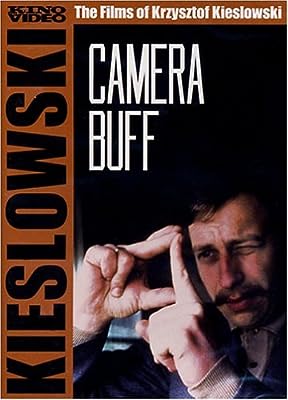 Price: $29.98
As of 2023-02-01 13:36:33 UTC (more info)
Product prices and availability are accurate as of 2023-02-01 13:36:33 UTC and are subject to change. Any price and availability information displayed on http://www.amazon.com/ at the time of purchase will apply to the purchase of this product.
Availability: Not Available - stock arriving soon
Buy Now from Amazon
Product Information (more info)
CERTAIN CONTENT THAT APPEARS ON THIS SITE COMES FROM AMAZON SERVICES LLC. THIS CONTENT IS PROVIDED 'AS IS' AND IS SUBJECT TO CHANGE OR REMOVAL AT ANY TIME.

Suffused with Kieslowski's dry wit and intelligence," (Jonathan Rosenbaum, The Chicago Reader(, Camera Buff is Krzysztof Kieslowski's (The Double Life of Veronique) tragi-comic meditation of filmmaking. Self-reflexive by nature, this fictional film about a documentary filmmaker is commonly referred to as a watershed in Kieslowski's transition from documentary to fiction filmmaking. "I'm frightened of real tears," Kieslowski once said. "In fact, I don't even know if I have the right to photograph them." This ethical question becomes the epicenter of the life of Filip Mosz, the main character in Camera Buff. Happily married and economically stable, the film's humble hero buys an 8mm film camera with the intention of filming his newborn child - and capturing the moment of attainment of a lifelong dream. But when a powerhouse director of the town's local factory recruits him to film an important board meeting, Filip's fascination with the medium grows into passionate dedication. At the command of a larger film unit and networking to enrich his career, Filip eventually reaches an irreconcilable deadlock with his wife, friends and the director who previously supported his cinematic ambitions. Camera Buff mirror Kieslowski's complex relationship with "reality" and its passable representations. Through Filip's often comic need to capture "life as it is," Kieslowski denounces the myth of objectivity at the base of cinema verite. More than implying that there is no engagement with reality that can leave it untouched, Kieslowski suggests that the very act of seeing is in itself a moment of creation.