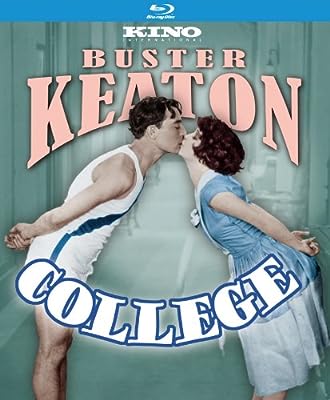 Price: $24.99
As of 2022-11-27 23:12:22 UTC (more info)
Product prices and availability are accurate as of 2022-11-27 23:12:22 UTC and are subject to change. Any price and availability information displayed on http://www.amazon.com/ at the time of purchase will apply to the purchase of this product.
Availability: Not Available - stock arriving soon
Buy Now from Amazon
Product Information (more info)
CERTAIN CONTENT THAT APPEARS ON THIS SITE COMES FROM AMAZON SERVICES LLC. THIS CONTENT IS PROVIDED 'AS IS' AND IS SUBJECT TO CHANGE OR REMOVAL AT ANY TIME.

Buster Keaton goes back to school and stages a hilarious send-up of university life in College. Keaton stars as Ronald, an idealistic freshman who attends Clayton College in pursuit of higher learning, but finds himself instead embroiled in a war of athletics as he fights for the heart of his beloved coed, Mary (Anne Cornwall). More than he had in any other feature, Keaton stretched the boundaries of solo physical comedy. In a series of unforgettable vignettes, stone-faced Ronald tries his hand as a baseball player, soda jerk, waiter, coxswain, and track star, performing each task with a steady determination but with consistently disastrous results. These scenes are especially amazing because in demonstrating Ronald's athletic inadequacies, Keaton reveals a surprising degree of physical prowess and finesse, particularly during the film's exhilarating climax. BONUS FEATURES: Audio commentary by film historian Rob Farr, founder of Slapsticon, Visual essay on the film's locations, ''The Scribe'', a 1966 industrial short that was Keaton's final filmed performance, Kino Lorber trailers and more!