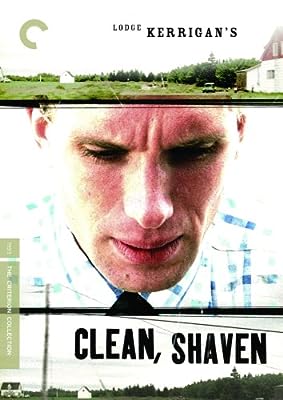 Price: $22.94
As of 2022-08-17 04:00:44 UTC (more info)
Product prices and availability are accurate as of 2022-08-17 04:00:44 UTC and are subject to change. Any price and availability information displayed on http://www.amazon.com/ at the time of purchase will apply to the purchase of this product.
Availability: Not Available - stock arriving soon
Buy Now from Amazon
Product Information (more info)
CERTAIN CONTENT THAT APPEARS ON THIS SITE COMES FROM AMAZON SERVICES LLC. THIS CONTENT IS PROVIDED 'AS IS' AND IS SUBJECT TO CHANGE OR REMOVAL AT ANY TIME.

On a remote Canadian island, a disturbed man searches for his daughter while being pursued by a detective.

Amidst a glut of more conventional independent films in the mid-1990s, Lodge Kerrigan's Clean, Shaven signaled the arrival of a gifted filmmaker with a singular vision. A controversial sensation on the film festival circuit when released in 1994, this riveting first feature (filmed over a two-year period on a meager budget of $60,000) is perhaps the first film to authentically convey the subjective experience of schizophrenia. This all-too-common mental illness essentially serves as a substitute for plot; instead of telling a conventional story of a murder investigation, Kerrigan leaves crucial details ambiguous as he focuses on the tormented existence of a young man named Peter (played by Peter Greene in a brave debut performance) who may or may not have brutally killed a young girl in one of the film's early scenes. His world--or rather, the world as perceived by his dysfunctional brain--is metaphorically compared to the random tuning of a radio, as schizophrenia prevents Peter from forming a cohesive reality out of the sights and sounds that constantly invade his consciousness. To express this fractured perception in cinematic terms, Kerrigan uses a truly extraordinary soundtrack--worthy of comparison to David Lynch's Eraserhead--that's frequently divorced from the visuals, emphasizing the disorienting symptoms of Peter's illness. The effect is both fascinating and deeply disturbing, especially in a notorious scene (definitely not for the squeamish) in which Peter removes one of his fingernails for reasons best left for viewers to discover. It's one of the creepiest, most unsettling moments in the history of American independent cinema, but it's also one of the things that makes Clean, Shaven a timeless and sensitively compassionate study of a condition that's mysterious and frequently misunderstood. A full decade later, Kerrigan would return to the subject of mental illness with his critically acclaimed film Keane, and David Cronenberg's Spider covers similar territory with equally unsettling results. --Jeff Shannon

On the DVD
Criterion's DVD release of Clean, Shaven is far superior to Fox Lorber's DVD release from 2000. In addition to an all-new, high-definition digital transfer supervised and approved by director Lodge Kerrigan, the DVD also includes a feature-length commentary/interview between Kerrigan and fellow director Steven Soderbergh, who became fast friends and colleagues after they met at the 1994 Sundance Film Festival. An astute interviewer in his own right, Soderbergh (who served as an executive producer of Kerrigan's 2004 film Keane) grills Kerrigan on all aspects of the making of Clean, Shaven and the various circumstances that directors must be prepared to deal with, from working with children to creatively accommodating the limitations of a "no-budget" production. Film critic Michael Atkinson contributes an audio-visual essay titled "A Subjective Assault," focusing specifically on Kerrigan's highly effective use of sound to convey the symptoms and disorienting reality of schizophrenia, and how this innovative soundtrack plays into the film's overall audio-visual strategy. Also included are eight segments of the film's original soundtrack, downloadable as MP3 files, and a booklet essay on the film by film critic Dennis Lim. --Jeff Shannon