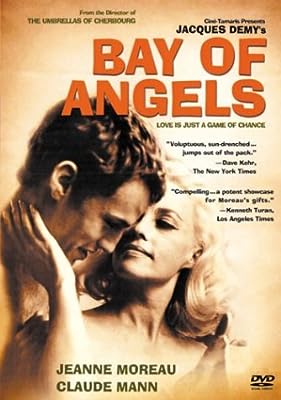 Price: $37.99
As of 2022-07-03 13:46:53 UTC (more info)
Product prices and availability are accurate as of 2022-07-03 13:46:53 UTC and are subject to change. Any price and availability information displayed on http://www.amazon.com/ at the time of purchase will apply to the purchase of this product.
Availability: Not Available - stock arriving soon
Buy Now from Amazon
Product Information (more info)
CERTAIN CONTENT THAT APPEARS ON THIS SITE COMES FROM AMAZON SERVICES LLC. THIS CONTENT IS PROVIDED 'AS IS' AND IS SUBJECT TO CHANGE OR REMOVAL AT ANY TIME.

Lovingly restored by his widow, Agnès Varda, Jacques Demy's brilliant second feature - long unavailable to American audiences due to print damage - can now be seen in its original glorious form.
One night while on vacation, Jean Fournier (Claude Mann), a bank employee, is introduced to gambling by a friend and soon becomes hooked. Intoxicated by winning large amounts of money, Jean abandons his normal middle-class existence and moves to the South of France where he meets Jackie (Jeanne Moreau), a compulsive gambler. Jean is fascinated by Jackie's insolent beauty and a feeling of complicity is soon established between them - but there is also a misunderstanding. Jean is sincerely in love with Jackie, whereas Jackie only puts up with Jean out of superstition; she believes that he brings her luck.
Together, they win and lose considerable sums at the table, but Jean soon grows tired of this rootless, chaotic life, as well of being the "mascot" of Jackie, for whom it seems that life itself is just a game of chance.

Les cousins (The Criteron Collection) [B...