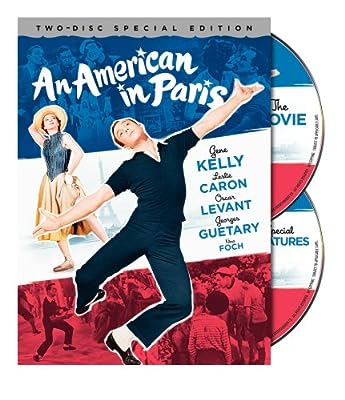 Price: $14.29
As of 2023-02-05 02:28:52 UTC (more info)
Product prices and availability are accurate as of 2023-02-05 02:28:52 UTC and are subject to change. Any price and availability information displayed on http://www.amazon.com/ at the time of purchase will apply to the purchase of this product.
Availability: Not Available - stock arriving soon
Buy Now from Amazon
Product Information (more info)
CERTAIN CONTENT THAT APPEARS ON THIS SITE COMES FROM AMAZON SERVICES LLC. THIS CONTENT IS PROVIDED 'AS IS' AND IS SUBJECT TO CHANGE OR REMOVAL AT ANY TIME.

A winner of six Oscars including Best Picture, An American in Paris (1951) was Vincente Minnelli's love letter to the City of Lights and to the music of George Gershwin. Gene Kelly plays Jerry Mulligan, a former American GI trying to make a living in France as an artist after the war. He's taken on by an American patron of the arts (Nina Foch) who has other intentions, but he falls in love with a local girl (Leslie Caron in her debut) who happens to be the intended of a Parisian cabaret performer (Georges Guetary). The music of George and Ira Gershwin sparkles throughout the film, including Kelly and Guetary's ironic duet "'S Wonderful," Kelly's simple ballad "Love Is Here to Stay," Guetary's flamboyant "I'll Build a Stairway to Paradise," and Kelly's tour-de-force "I Got Rhythm" dance with a bunch of kids. Oscar Levant plays his usual acerbic self as Jerry's friend and pianist, and performs the final movement of the Concerto in F--accompanied by an orchestra of himselves. The movie famously concludes with a 17-minute fantasy ballet set to the tone poem the movie is named after. While its scope and placement might seem a little odd to viewers decades later, it's an elaborate showcase of Kelly's dancing and choreography (he received an honorary Oscar that year for it), and started a trend that would be followed by similar numbers in Singin' in the Rain and Oklahoma! --David Horiuchi

A Tree Grows in Brooklyn

All About Eve (Two-Disc Special Edition)