Ace in the Hole (The Criterion Collection) 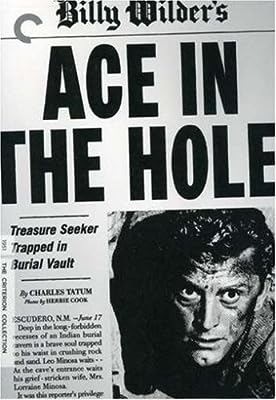 Price: $39.95
As of 2022-11-30 09:44:09 UTC (more info)
Product prices and availability are accurate as of 2022-11-30 09:44:09 UTC and are subject to change. Any price and availability information displayed on http://www.amazon.com/ at the time of purchase will apply to the purchase of this product.
Availability: Not Available - stock arriving soon
Buy Now from Amazon
Product Information (more info)
CERTAIN CONTENT THAT APPEARS ON THIS SITE COMES FROM AMAZON SERVICES LLC. THIS CONTENT IS PROVIDED 'AS IS' AND IS SUBJECT TO CHANGE OR REMOVAL AT ANY TIME.

One of the most scathing indictments of American culture ever produced by a Hollywood filmmaker, Academy Award-winner Billy Wilder's Ace in the Hole is legendary for both its cutting social critique and its status as a hard-to-find cult classic. Kirk Douglas gives the fiercest performance of his career as Chuck Tatum, an amoral newspaper reporter caught in dead-end Albuquerque who happens upon the story of a lifetime-and will do anything to ensure he gets the scoop. Wilder's follow-up to Sunset Boulevard is an even darker vision, a no-holds-barred expose that anticipated the rise of the American media circus.

The character of newspaperman Chuck Taylor (Kirk Douglas) is best summed up by an astonished bystander (herself no soft touch): "I met a lot of hard-boiled eggs in my time, but you--you're 20 minutes!" Meet the "hero" of Billy Wilder's corrosive 1951 classic Ace in the Hole (a.k.a. The Big Carnival), a former big-time reporter whose reputation is so tarnished he's now at an Albuquerque rag, chasing down local-interest stuff. Until, that is, a local miner gets stuck in a cave--a situation that Taylor not only exploits but actually manipulates, the better to improve his career chances. Wilder got the idea for the movie from the real-life media circus that followed the Floyd Collins story (Collins was trapped in a cave for over a week in 1925). Needless to say, the opportunities for displaying greed and venality are fully drawn out by Wilder; indeed, the film looks unbelievably prescient from a modern perspective of media overload.

Although Wilder had scored a success with Sunset Boulevard just a year earlier, he misread the public's ability to stare into the merciless mirror he held up to them in Ace in the Hole. The movie bombed. Paramount changed the title to The Big Carnival, thus wrecking one of Wilder's most acidic puns, but it didn't help. It also doesn't matter: Ace in the Hole is one of the truly grown-up movies of its time, and age has only improved it. Wilder's ear for cynical dialogue is honed to its sharpest point, and Kirk Douglas has one of his best parts, which he attacks with customary ferocity. Jan Sterling plays the hard-nosed wife of the trapped man, with Porter Hall as Douglas's publisher--the lone voice of decency in the film's cruel parade. Admirably, Wilder takes this all the way down the line: the ending of the movie might be the best in-your-face finish since Public Enemy. --Robert Horton