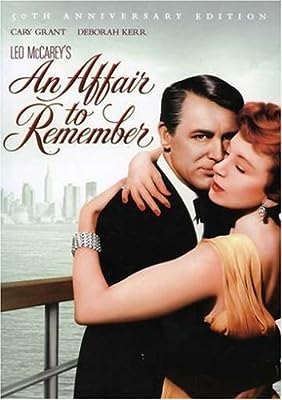 Price: $19.98
As of 2022-08-09 06:13:19 UTC (more info)
Product prices and availability are accurate as of 2022-08-09 06:13:19 UTC and are subject to change. Any price and availability information displayed on http://www.amazon.com/ at the time of purchase will apply to the purchase of this product.
Availability: Not Available - stock arriving soon
Buy Now from Amazon
Product Information (more info)
CERTAIN CONTENT THAT APPEARS ON THIS SITE COMES FROM AMAZON SERVICES LLC. THIS CONTENT IS PROVIDED 'AS IS' AND IS SUBJECT TO CHANGE OR REMOVAL AT ANY TIME.

A man and a woman, both engaged, meet on a cruise and plan to meet six months later atop the Empire State Building.

Get out your handkerchiefs for this four-star weepie, a 1957 remake of the 1939 Love Affair, directed by Leo McCarey, who also made the original. Grant and Kerr are strangers on an ocean liner, involved with other people, but who can't resist each other for a shipboard romance. They decide to test whether this is the real thing by agreeing to split up, then meet in six months atop the Empire State Building. Is there anyone who can resist that setup or the tragic romantic mishap that nearly splits them up? Can you keep dry eyes during the famous finale? Some prefer the original (with Charles Boyer); practically no one liked the underrated 1994 remake with Warren Beatty and Annette Bening. While occasionally a shade slow, this one soars on Grant's charm and Kerr's noble suffering. --Marshall Fine