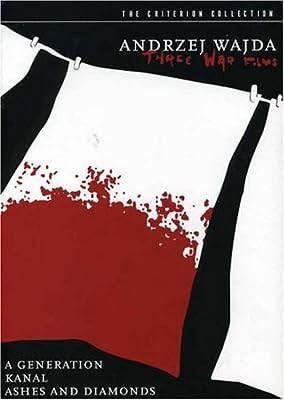 Price: $52.93
As of 2023-02-08 05:26:30 UTC (more info)
Product prices and availability are accurate as of 2023-02-08 05:26:30 UTC and are subject to change. Any price and availability information displayed on http://www.amazon.com/ at the time of purchase will apply to the purchase of this product.
Availability: Not Available - stock arriving soon
Buy Now from Amazon
Product Information (more info)
CERTAIN CONTENT THAT APPEARS ON THIS SITE COMES FROM AMAZON SERVICES LLC. THIS CONTENT IS PROVIDED 'AS IS' AND IS SUBJECT TO CHANGE OR REMOVAL AT ANY TIME.

Andrzej Wajda's Ashes and Diamonds is looked at as one of the greatest of all postwar East-Central European films, and also the most vital work of the Polish School, completing what many believe to be Wajda's war trilogy, which followed A Generation and Kanal. The story explores a cool and suave resistance fighter named Maciek has been given orders to assassinate an incoming commissar. Unfortunately a mistake stalls his progress, which eventually leads him to meet a beautiful barmaid, who if only for a short period of time, will give him a glimpse of a more peaceful and happier existence, and of a life that could have been.

In 1999, Polish director Andrzej Wajda received an Honorary Academy Award for his body of work - more than thirty-five feature films, beginning with A Generation in 1955. Wajda's second film, Kanal, the first ever made about the Warsaw uprising, secured him the Special Jury Prize at Cannes and started him on the path to international acclaim, secured with the release of his masterpiece, Ashes and Diamonds, in 1958. These three groundbreaking films ushered in the "Polish School" movement and later became known as the "War Trilogy." But each boldly stands on its own - testaments to the resilience of the human spirit, the struggle for personal and national freedom, and Wajda's unique contribution to his homeland and to world cinema. The Criterion Collection is proud to present this director-approved edition, with new transfers of all three films and extensive interviews with the director and his colleagues. A Generation: Stach is a wayward teen living in squalor on the outskirts of Nazi-occupied Warsaw. Guided by an avuncular Communist organizer, he is introduced to the underground resistance?and to the beautiful Dorota. Soon he is engaged in dangerous efforts to fight oppression and indignity, maturing as he assumes responsibility for others? lives. This coming-of-age story of survival and shattering loss delivers a brutal portrait of the human cost of war. Ashes and Diamonds: On the last day of World War Two in a small town somewhere in Poland, Polish exiles of war and the occupying Soviet forces confront the beginning of a new day and a new Poland. In this incendiary environment we find Home Army soldier Maciek Chelmicki, who has been ordered to assassinate an incoming commissar. But a mistake stalls his progress and leads him to Krystyna, a beautiful barmaid who gives him a glimpse of what his life could be. Gorgeously photographed and brilliantly performed, Ashes and Diamonds masterfully interweaves the fate of a nation with that of one man, resulting in one of the most important Polish films of all time. Kanal: "Watch them closely, for these are the last hours of their lives," announces a narrator, foretelling the tragedy that unfolds as a war-ravaged company of Home Army resistance fighters tries to escape the Nazi onslaught through the sewers of Warsaw. Determined to survive, the men and women slog through the hellish labyrinth, piercing the darkness with the strength of their individual spirits. Based on true events, Kanal was the first film ever made about the Warsaw Uprising and brought director Andrzej Wajda to the attention of international audiences, earning the Special Jury Prize in Cannes in 1957.

Andrzej Wajda's first three features form a landmark in Polish cinema, and a monument of that great decade of European movies, the 1950s. Working mostly during a thaw in Soviet control over his homeland, Wajda and his collaborators created three films that looked back at the Second World War from the perspective of a new generation whose youth was defined by the catastrophe of Nazi occupation and Soviet control. The first film is titled A Generation (1955), as though to sum up the collective feeling. It's set in Warsaw in 1943, as young workers join the anti-Nazi resistance movement (including an attempt to help Jews escape from the ghetto). Shot in real locations, but with an expressionistic eye, A Generation is especially drawn to the ambiguous supporting character played by Tadeusz Janczar, a much more conflicted and modern character than the nominal hero. (Roman Polanski plays one of the fighters.)

Kanal (1957) tracks the final hours of the Warsaw Uprising, a rebellion by the Poles and their Home Army against the Germans. (The Russian army, parked on the other side of the Vistula River, allowed the Poles to be wiped out without interference.) First we meet the characters in a last stand at a bombed-out field of urban rubble, then follow them in a miserable escape through the dank, gas-filled sewers beneath the city. The desperation of final heroic acts, and Wajda's ingenuity in finding new ways to shoot in the sewer sets, keeps the film balanced in nerve-wracking suspense.

Set on the final day of World War II, Ashes and Diamonds explodes with mixed-up passion and anger, and with the deliberately James Dean-like performance of Polish icon Zbigniew Cybulski. Wadja expands his range here with a visual dynamism that includes a heady use of symbols and striking borrowings from Citizen Kane and film noir. The nervy, dark-spectacled Cybulski plays a Home Army member out to assassinate a Communist official, an assignment bungled in the opening sequence. So the job still needs completing, but the would-be assassin is diverted by a melancholy barmaid and the possibility of turning away from violence... but this is Poland, and wry fatalism prevails. The doomed national feeling is maintained in powerful fashion in these three movies--which are not, technically speaking, a trilogy, though they have always spiritually been of-a-piece.

Criterion assembled this DVD set with Wajda's approval, and he appears in illuminating half-hour interview segments on each disc (along with filmmaker Janusz Morgenstern and critic Jerzy Plazewski). Valuable production stills and posters, Wajda's film-school short "Ceramics from Ilza," and essays are included. Most importantly, the digital transfers themselves are perfectly stunning. --Robert Horton

Ashes and Diamonds is known for being filmed right in the aftermath of the liberalizing 1956 'thaw', otherwise known as 'the Polish October.' It seems to be a very small world that these character's inhabit in Ashes and Diamonds, where everybody seems to know everybody, liasions are easily made and just as easily broken, and character's simply betray, manipulate, and deceit one another; as long as it fulfills either some form of political ideology. And yet it's the fascinating creation of the character of Maciek Chelmick, with his dark glasses and smooth exterior that took European audiences by storm. Maciek blends the existential toughness of the gritty resistance, and the boyish vulnerability of fashion and coolness; as he was often called Poland's James Dean and Marlon Brando.