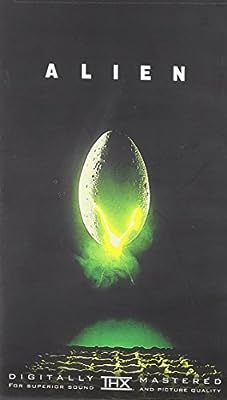 Price: $9.98
As of 2022-08-18 10:34:45 UTC (more info)
Product prices and availability are accurate as of 2022-08-18 10:34:45 UTC and are subject to change. Any price and availability information displayed on http://www.amazon.com/ at the time of purchase will apply to the purchase of this product.
Availability: Not Available - stock arriving soon
Buy Now from Amazon
Product Information (more info)
CERTAIN CONTENT THAT APPEARS ON THIS SITE COMES FROM AMAZON SERVICES LLC. THIS CONTENT IS PROVIDED 'AS IS' AND IS SUBJECT TO CHANGE OR REMOVAL AT ANY TIME.

Unbeknownst to the crew of a space ship, it has taken on an alien stowaway that incubates in some humans and hunts the rest. In space, no one can hear you scream.

A landmark of science fiction and horror, Alien arrived in 1979 between Star Wars and The Empire Strikes Back as a stylishly malevolent alternative to George Lucas's space fantasy. Partially inspired by 1958's It! The Terror from Beyond Space, this instant classic set a tone of its own, offering richly detailed sets, ominous atmosphere, relentless suspense, and a flawless ensemble cast as the crew of the space freighter Nostromo, who fall prey to a vicious creature (designed by Swiss artist H.R. Giger) that had gestated inside one of the ill-fated crew members. In a star-making role, Sigourney Weaver excels as sole survivor Ripley, becoming the screen's most popular heroine in a lucrative movie franchise. To measure the film's success, one need only recall the many images that have been burned into our collective psyche, including the "facehugger," the "chestburster," and Ripley's climactic encounter with the full-grown monster. Impeccably directed by Ridley Scott, Alien is one of the cinema's most unforgettable nightmares. --Jeff Shannon